Scottie Scheffler played impressively on day three of The Masters to maintain a three-shot lead over Cameron Smith with 18 holes remaining. 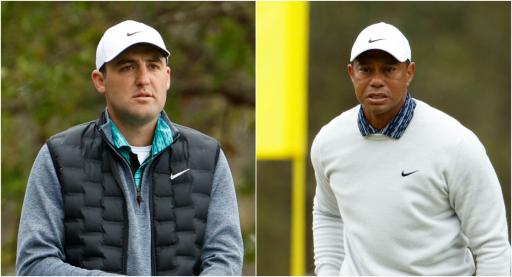 Scottie Scheffler is on the path to his first major title at The Masters as he takes a three-shot lead into the final round, with Tiger Woods well down the leaderboard.

Scheffler experienced moments of both complete control and insecurity on the back nine at Augusta National. His round of 71 took him to 9-under-par and he leads by three from Cameron Smith.

The World No.1 began the third round on Saturday with a five-shot lead and he didn't look back with two birdies in his first three holes. He moved on to 10-under-par.

The chasing pack did their best to apply pressure on him. 2011 Masters champion Charl Schwartzel holed his second shot from the middle of the 10th fairway for an eagle to reach 6-under-par.

Gary Woodland achieved the same feat earlier in the week, but the South African made four bogeys in his next seven holes to lose ground.

Related: Shane Lowry SWEARS at his caddie during third round of The Masters!

Despite giving a shot back to the course on the 4th hole, Scheffler made two more birdies on the 6th and 8th holes to reach 11-under-par. When he made his fifth birdie of the day on the 13th hole, he retained his five-shot advantage over Smith.

But Smith continued to apply pressure. The Australian, who won The Players Championship last month, made four birdies between hole 8 and hole 15 to reach 7-under-par.

Smith bogeyed the par-3 16th hole but as Scheffler bogeyed the 15th hole to fall back to 9-under-par, he carded the low score of the day of 68 to sit on 6-under-par and just three shots behind.

Scheffler set up a birdie with a stunning approach on the 17th hole, but a poor hooked drive on the 18th meant he needed to take a penalty drop from a bush.

The recent three-time winner on the PGA Tour recovered to make a bogey. He a carded a round of 1-under-par to maintain a healthy advantage over Smith.

He is five shots ahead of Sungjae Im on 4-under-par and seven shots ahead of Schwartzel and Shane Lowry on 2-under-par. Justin Thomas and Corey Conners sit on 1-under-par, completing a group of only seven players to be in the red after 54 holes.

As for Woods, he admitted that his putting was poor on Saturday. He made five three-putts in one day for the first time in his career on his way to a 6-over-par 78.

The five-time Masters champion made five bogeys and two double-bogeys on a day where his legs may have felt the strain of the Augusta hills.

Next Page: "It's like I hit a thousand putts": Tiger Woods on worst Masters round