Mackenzie Hughes hit a shot that every golfer dreads during the first round of The Masters, clattering a shank into the crowd on the 15th hole. 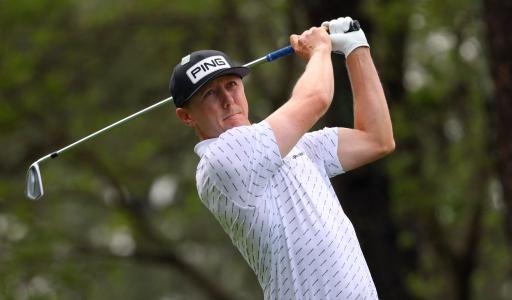 There is one word in golf that sends shivers down the spine of every golfer and it even gives nightmares to some of the best players at The Masters.

The dreaded shank is one of the worst feelings when you swing down and feel the hosel connecting with the ball. Unfortunately, Mackenzie Hughes experienced this feeling at The Masters on Thursday.

The Canadian laid up on the 15th hole like many players were doing in the first round and he had a short shot into the green which slopes from back to front.

Hughes skewed his shot straight to the right and it seemed to dash into the crowd and bounce back out next to the greenside bunker.

Related: Tiger Woods: "Some of the guys know, they've seen the pictures"

The one-time PGA Tour winner went on to card a 1-over-par 73 which is currently six shots behind the impressive leader Sungjae Im.

His shank on the par-5 15th meant he finished the day on the wrong side of par, but this was a respectable score on a blustery day at Augusta National.

The South Korean Im carded a solid 67 to sit one shot ahead of Cameron Smith, who made eight birdies and two double-bogeys on the first day.

Next Page: Tiger Woods almost makes hole-in-one and starts well at The Masters