Tiger Woods: "Some of the guys know, they've seen the pictures"

Tiger Woods says just playing The Masters feels like a victory as he gave an insight into his gruelling recovery process. 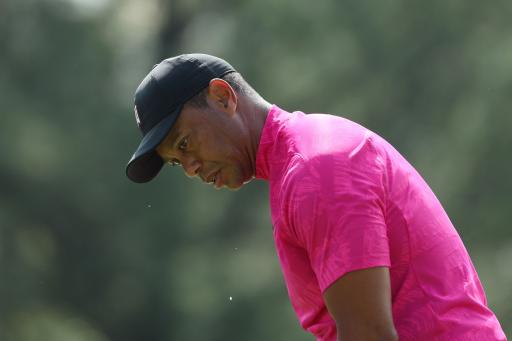 Tiger Woods admitted just playing an opening round at The Masters felt like a victory as he gave a grisly insight into how bad his right leg was.

More: Matthew Wolff snaps his clup at The Masters

Woods slightly limped his way onto the first tee at Augusta National but by the time he reached the 18th it may as well have been a swagger. That 1-under par 71 on his return to golf 508 days after he last played competitively cannot be understated.

The 46-year-old shot five better than lil bro and one of the tournament favourites Justin Thomas. He was also five better than an injured Bryson DeChambeau who was defying his doctors' orders to play. Just bonkers stuff, really.

Woods received an incredible reception on the first tee but his opening shot wasn't as spectacular as the galleries following him. He came up and out of that thing and left himself with a left-to-right peeler to get onto the green.

He came up short and had to chip onto the green and left himself with a testing putt for par. Of course he made it. From there, it was a masterclass in course management. Woods plotted his way round expertly.

There was some fortune along the way, of course. But for the most part, Woods used all the skills of his escapology to manufacture a solid opening round as Dustin Johnson, Cameron Smith and World No. 1 Scottie Scheffler started brilliantly.

Woods made the turn at level par after a sloppy bogey at the par-5 eighth. It was the only thing that upset him all day, he said. That silly bogey followed a near ace at six.

Woods made birdie at 13 after his eagle putt came up just shy. At 14, he made a loose swing and yelled: "No, Tiger!" as his Bridgestone golf ball sailed into the pine straw.

From there managed to find the front edge of the green as Woods gave us another rendition of his Houdini act. But he then misjudged the shot coming back and missed his par putt.

At 16, he drained a long birdie putt. Cue trademark fist pump. At 18, he double crossed his tee shot and sent it out way left.

He was so far back he had to lay up. But his third was sublime. He couldn't even see the pin but he judged his pitch perfectly and made par.

How did Woods feel after his opening round?

"I am as sore as I expected to feel, but it was amazing to have -- like I was telling the team all week, come game time, it will be a different deal," he said.

"My adrenaline will kick in. I'll get into my own little world, and I'll get after it. It's about the training that we've done to have the stamina to go.

"I'm going to be sore, yes. That's just the way it is. But the training cycles that we've had to make sure that I have the stamina to keep going -- and this is only one round. We've got three more to go. There's a long way to go and a lot of shots to be played."

Woods revealed he had a terrible warm-up but was reminded of one his father's lessons. It's a warm-up, he told himself. Now go play. And Woods did.

As everyone has rightly pointed out, the challenge for Woods over the course of four days was just putting one foot in front of the other. How did he feel he coped with the walk?

He said: "Not easy. People have no idea how hard it's been. My team does. They've worked with me every single day. I've said this before, we haven't taken a day off since I got out of the bed after those three months.

"Granted, some days are easier than others. Some days we push it pretty hard, and other days we don't. But always doing something.

Woods has for so long defined victory by winning tournaments. But does he count this as win?

Yes, said Woods, before adding: "If you would have seen how my leg looked to where it's at now, the pictures -- some of the guys know. They've seen the pictures, and they've come over to the house and they've seen it. To see where I've been, to see -- to get from there to here, it was no easy task."

Next page: What's in the bag of Jon Rahm at The Masters?