Viktor Hovland wore an extraordinary pair of pink trousers on the first day of The Masters and he caught the eye of many golf fans. 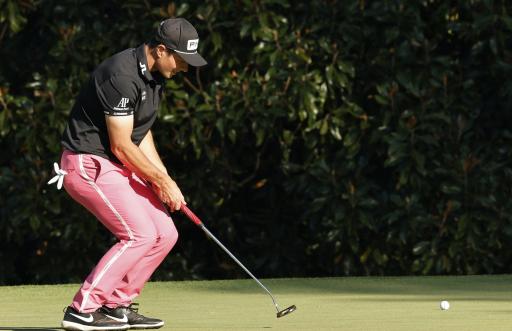 Viktor Hovland has grown into one of the most popular players on the PGA Tour and he caught the eye at The Masters with a special choice of clothing.

During the first round at Augusta National, Hovland sported a pair of bright pink trousers as he walked the famous fairways in Georgia.

The young Norwegian wore a normal black shirt, so his trousers stood out like a sore thumb even amongst the azaleas and the beauty of the venue.

Hovland had a very mixed day on Thursday. He finished with a card of level par after making five birdies, three bogeys and a double-bogey on the par-4 11th hole.

Related: Tiger Woods: "Some of the guys know, they've seen the pictures"

Hovland, 24, has already won the Hero World Challenge, the World Wide Technology Championship and the Dubai Desert Classic in the last six months.

He is much fancied to go well this week and he is five shots behind Sungjae Im after 18 holes. Im made five birdies and an eagle on his way to a solid 67.

Hovland made a similar clothing choice to five-time Masters champion Tiger Woods who wore a pink shirt on Thursday. He shot a hugely impressive 71 after a 508-day absence from the PGA Tour.

Take a look below at some of the best comments on Viktor Hovland's trousers:

If Viktor Hovland shot even par in these pants, IMAGINE what he could do tomorrow wearing something better pic.twitter.com/llDjgl66RM

Possibly worst outfit ever. There was only one Jesper...C'mon man. Who's in charge of his clothing? Get it together. And burn the pants please.

Let's all agree we never need to see the Norwegian track suit ever again pic.twitter.com/KGGn9vZdFv

Viktor Hovland managed an even par round at The Masters while wearing Victoria's Secret pajama pants. pic.twitter.com/sdfu9gB27c

Next Page: PGA Tour pro SHANKS ball into the crowd at The Masters