Tiger Woods gave an honest assessment of his putting after a sobering day at The Masters where he recorded his worst ever round. 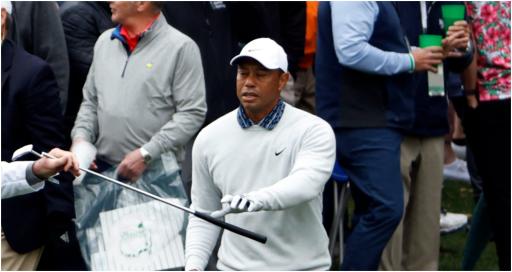 Tiger Woods admitted after his worst ever round at The Masters it was like he hit "a thousand putts".

Related: Shane Lowry swears at his caddie over poor yardage

There was always a big question over whether or not the 46-year-old would endure four days of walking at Augusta National.

Woods was up for the fight and suggested he is ready for the challenge ahead but cut a visibly withered figure after a third round, 6-over par 78.

That was the highest score the big cat has recorded in 93 rounds at Augusta.

It meant that he found himself at 7-over par after 54 holes in a tie for 41st at the 86th Masters on the 25th anniversary of his first green jacket win.

Woods' round included a horrid four putt at the fifth hole for a double bogey. He also had five other bogeys and finished with a double, too.

There was some classic Tiger moments. Of course there was. In fact, Woods flushed it all day but it was old faithful that let him down.

Woods made a classic birdie at 12 to give the patrons something to cheer about but by the time he reached 18 he looked a beaten man.

He said: "I mean, it's just like I hit a thousand putts out there on the greens today. Obviously it's affected the score. You take those away and I have normal two putts, I made even par for the day.

"I did what I needed to do ball striking-wise, but I did absolutely the exact opposite on the greens."

The 15-time major champion added:  "I just could not get a feel for getting comfortable with the ball.

"Posture, feel, my right hand, my release, I just couldn't find it.

"Even [with] as many putts as I had, you'd think I'd have figured it out somewhere along the line, but it just didn't happen."

Woods did not comment about when we are likely to see him next in action after The Masters.