Tiger Woods was at Augusta National with Justin Thomas and his son Charlie yesterday as he ramps up his preparation for The Masters. 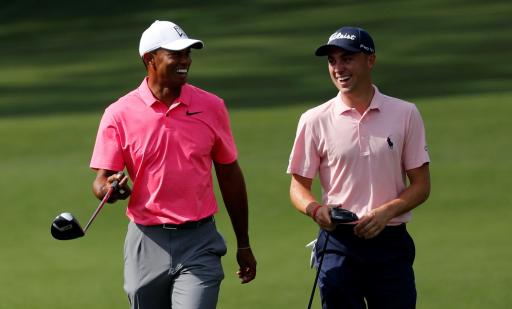 Tiger Woods played 18 holes at Augusta National on Tuesday as he closes in on a final decision to play at The Masters.

According to ESPN, Woods played every hole at the famous venue and "he looked good" in doing so. He then jetted off back to Florida.

Woods was at Augusta with his son Charlie, who is also a talented golfer, and good friend and fellow major champion Justin Thomas.

The 46-year-old is still on the entry list that appears on the official website of The Masters. With just eight days until the first tee shots are hit, it seems very likely that he will play.

Related: The funny reason why Tiger Woods was late to the golf course at the 2005 US Open

#NEW: “He played every one of them (all 18 holes). He looked good to me.”
—A source speaking to ESPN with knowledge of Tiger’s practice round at Augusta.

Woods could be making his first appearance on the PGA Tour since the rescheduled Masters tournament in November 2020. He is on course to defy the odds and his crippling injuries from a serious car crash in February 2021.

The 15-time major champion was filmed practising at Medalist Golf Club last weekend. He was seen hitting a driver which could be a sign his strength and confidence is increasing.

He played with Charlie at the PNC Championship in December, a father-son event on the PGA Tour, and they came second to John Daly and his son.

When he hosted the Genesis Invitational in February, he said during an appearance in the commentary booth that he wasn't sure he would play at The Masters, but he would be at the Champions Dinner.

Woods has won The Masters five times in his career, with his most recent victory coming in 2019. This was arguably his greatest moment as he came back from injury again.