Throwback: Why did Tiger Woods cause controversy during the 2013 Masters?

Tiger Woods was involved in the biggest golf story during 2013 after he took an illegal drop at Augusta National. 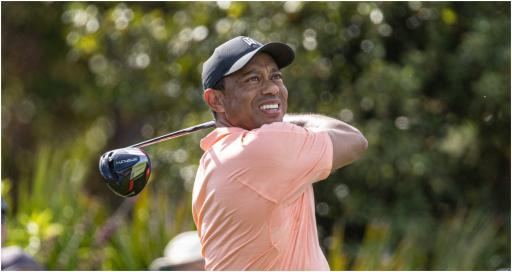 Tiger Woods may be playing the 2022 Masters if it is to be believed that he is scouting the course before making a decison.

So GolfMagic decided to take a trip down memory lane to revisit an interesting rule fiasco involving the 15-time major champion.

Cast your mind back to the 2013 Masters and you might remember the tale. Woods got a bad break, then took a bad drop, but he still played the weekend.

Woods was deemed to have taken an improper drop on the 15th hole during Friday's second round when his approach shot clattered the pin and bounced back into the water.

The big cat made an impressive bogey on the par-5 but come Saturday morning that score was changed to a triple bogey. What happened there?

Woods went onto explain on his Twitter exactly what happened from his perspective:

At hole #15, I took a drop that I thought was correct and in accordance with the rules. I was unaware at that time I had violated any rules.

I didn’t know I had taken an incorrect drop prior to signing my scorecard. Subsequently, I met with the Masters Committee Saturday morning..

and was advised they had reviewed the incident prior to the completion of my round. Their initial determination..

was that there was no violation, but they had additional concerns based on my post-round interview. After discussing the situation...

...with them this morning, I was assessed a two-shot penalty. I understand and accept the penalty and respect the Committees’ decision.

More: Get your very own green jacket ahead of The Masters

Before 2012, Woods would have been disqualified for signing an incorrect scorecard.

But his bacon was saved as the USGA and R&A changed the Rule in 2011 to allow a player to have penalty strokes added afterward if facts were not reasonably presented at the time.

It was described by the USGA executive director at the time, Mike Davis, as a logical and important change.

Fred Riley, the chairman of the Masters competition committee, explained at the time that after watching the footage and based on the evidence, they determined Woods complied with the rules.

But Riley added: "After he signed his scorecard, and in a television interview subsequent to the round, the player stated that he played further from the point than where he had played his third shot.

"Such action would constitute playing from the wrong place.

"The subsequent information provided by the player's interview after he had completed play warranted further review and discussion with him this morning.

"After meeting with the player, it was determined that he had violated Rule 26, and he was assessed a two-stroke penalty.

"The penalty of disqualification was waived by the committee under Rule 33 as the committee had previously reviewed the information and made it's intitial determination prior to the finish of the player's round.''

The fallout was interesting to say the least. Woods' long time agent Mark Steinberg explained how Woods met with the committee.

He said: "He was not doing any negotiating. He was coming in to explain himself.

"Whatever decision was going to be rendered, he was going to respectfully accept it. He abided by the rules of golf.''

Sir Nick Faldo took a dim view of Woods, saying that he thought the situation was dreadful and added: "Tiger should really sit down and think about this and what it will leave on his legacy."

Everyone in the golf world had an opinion and either backed Woods or felt he should not have played the weekend.

Woods never challenged the two-shot penalty that was incurred, meaning he went from one stroke inside the cut to missing it by a stroke.

At the time when he made his way into the clubhouse he was trailing early leader Jason Day by three strokes.

Only Tiger. Only at Augusta.

Next page: Tiger Woods "exhausting every effort" to play The Masters