Rory McIlroy makes equipment change ahead of The Masters

Rory McIlroy has made an adjustment to his equipment ahead of his first round at Augusta National. 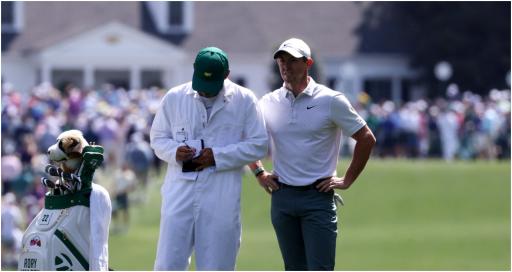 Rory McIlroy has made a few changes ahead of The Masters and it appears that one of them is his golf ball.

He decided to play the Valero Texas Open last week to get himself in the swing of things, but unfortunately he missed his first cut since The Scottish Open.

The Northern Irishman also decided to have a quick scouting mission at Augusta National solo. He flew in, then flew out.

In the past, he would have stayed at the property and played a few more practice rounds, but his preparation is done, he said.

More: Rory McIlroy believes it was "beneficial" for him to miss the cut at the Texas Open

It has led him to believe that there is less pressure compared to his run in 2015 where he had his best finish at The Masters.

Naturally, there will be a lot of talk about whether or not McIlroy can win the career grand slam and join an elite group of just six individuals to do so.

But there has been one small change for the 32-year-old. In Texas, he decided to conduct a "litmus test" according to the Golf Channel.

He decided to change his golf ball to something that was "a bit more stable in the wind".

McIlroy told the publication: "I just went back to a golf ball that's a little more stable in the wind, a little less spin, so just getting to grips with that again was good. I'm excited about that, I think that's going to be really good for me."

McIlroy is a TaylorMade staffer and has traditionally used the TP5x. It is not clear as of yet what ball he is using but images from his practice round look like he is using the TP5.

The forecast for the first two days' play at Augusta National doesn't look too good where winds of up to 30mph predicted.

McIlroy was also due to take part in the Masters Par-3 Contest, and traditionally he has not thought too much about it.

Now he and his wife Erica Stoll are parents to Poppy, who was born in September 2020.

McIlroy told the media: "It's funny. When you don't have children, the Par-3 seems like a bit of an afterthought, and then once kids arrive, it sort of becomes the highlight of the week in a way.

"So, yeah, I'm looking forward to it. It will be fun to get out there tomorrow and watch her run around.

"Yeah, it's amazing. I think back to my first appearance here in 2009, and then this is my 14th and just how quickly the time goes and the sort of evolution that life takes on and the places that you found yourself.

McIlroy is teeing off at 2:03pm alongside Matthew Fitzpatrick and Brooks Koepka.

McIlroy was also asked in his press conference earlier in the week about his age and if he takes inspiration from the likes of Tiger Woods, Paul Casey and others heading towards their 50s.

He said: "Look, I've always said time is on my side, and I'll keep saying that until it isn't, whenever that is. But right now I still feel like time's on my side. I'm 32 years old with a ton of experience.