Scottie Scheffler and his girlfriend Meredith Scudder got married in 2020 and since then, his PGA Tour career has gone from strength to strength. 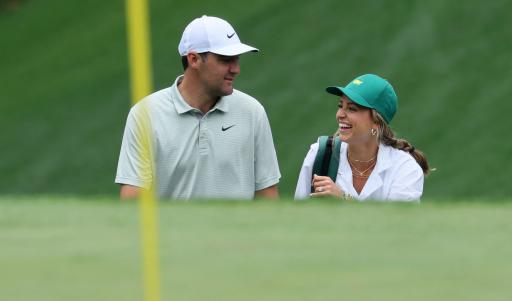 Scottie Scheffler is having the time of his life on the PGA Tour. He is a three-time winner, he is the World No.1 and he is on course to win his first major championship at The Masters.

He picked up his first PGA Tour win at the WM Phoenix Open in February and he followed this up with another victory at the Arnold Palmer Invitational.

He knocked Jon Rahm off the top of the world rankings by winning the WGC Match Play. He has won three times in his last five appearances.

The 25-year-old may be enjoying his golf career, but his personal life is also flourishing too. We got to see Scheffler and his wife Meredith Scudder together at The Masters Par-3 Contest.

Related: Shane Lowry SWEARS at his caddie during third round of The Masters

Scheffler regularly visited his girlfriend on campus and they both graduated in 2018. Scheffler proposed to Meredith at Arbor Hills Nature Preserve in June 2020 and he got a resounding yes.

Meredith has been a huge supporter of Scheffler's career and she has been there for many of his best moments. She carried his bag during the fun Par-3 Contest ahead of this week's first major of the year.

She will have been nervous watching her husband on the final hole at Augusta National on Saturday, as he hooked his drive into a bush while holding a four-shot lead.

Scheffler made a bogey and carded a 71 to take a three-shot lead over Cameron Smith into the final round.