Collin Morikawa has now finished in the top five of every major tournament, winning the PGA Championship and The Open Championship along the way. 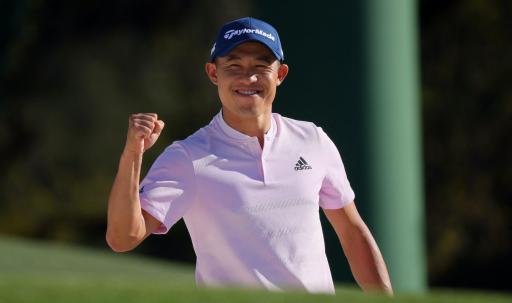 Collin Morikawa feels at home in major championships as he showed once again at The Masters. His walk-off birdie from the bunker on 18 helped him to a fifth-place finish.

Morikawa was in scintillating form on Sunday at Augusta National. Starting the day on 1-over-par, he made six birdies and an eagle to card a 5-under-par 67. He has now leapfrogged Jon Rahm as the World No.2.

In doing so, he has become the fourth-youngest player to achieve top-five finishes in all four major championships. His previous best finish at The Masters was tied 18th as he has only made three appearances at the event.

The youngest ever player to accomplish this was Jordan Spieth at the age of 22, followed by the legendary Jack Nicklaus at the age of 23 years, five months and 22 days old.

Collin Morikawa finished 5thyesterday, giving him a top-5 in all four majors.

He's the fourth-youngest to get a top-5 in each in men's major championship history.

Tiger Woods, who performed valiantly at this year's tournament, made top fives in each major event by the time he was 23 years, seven months and 16 days old.

Morikawa is 25 and it took him just eight appearances in major championships to pick up two wins. He became the first player to win two different majors on his debut, winning the USPGA in 2020 and The Open in 2021.

Last week, Morikawa truly experienced what a Sunday at The Masters was like, especially with his playing partner Rory McIlroy exciting the crowds with his heroic round of 64.

"It's amazing. Even on Thursday the crowds following Tiger and hearing those roars, I've never heard anything like it," Morikawa said after the final round.

"I've been able to play with Tiger pre-Covid at Torrey. That was my first time, and I could experience what fans are like, but it's nothing like out here and the echoes and the roars. And what you just saw on the last hole with me and Rory, that was the coolest thing in the world."