Jon Rahm believes the PGA Tour Player Impact Program is already over for another year as Tiger Woods confirms he is competing at The Masters. 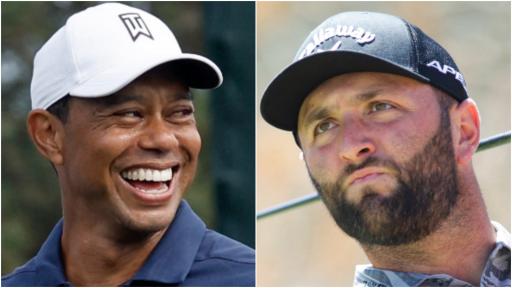 Woods confirmed to the media on Tuesday afternoon that he is ready to compete in The Masters - and he even believes he can win a sixth Green Jacket.

In 2021, Woods won the PGA Tour's inaugural PIP over Phil Mickelson in second.

Woods pocketed a cool $8 million, despite only playing in the PNC Championship with his son Charlie Woods at the end of the year.

The PGA Tour's PIP provides a lucrative sum of money as a bonus pool for the top 10 players recording the highest composite score across a series of popularity-measuring metrics.

Related: Tiger Woods will play in The Masters and he thinks he can win it

In the eyes of Rahm, who has now fallen to World No.2 following the recent rise of Scottie Scheffler, the PGA Tour may as well just give Woods the PIP for a second consecutive season as a result of returning to the circuit this week.

Woods is making his first competitive start on the Tour since he finished tied 38th at The Masters in November 2020.

"I think what we all know for sure in three days is that Tiger Woods is going to win the PIP again for sure," said Rahm.

"I think that is the biggest impact for all of us. He's pretty much won it all in one week."

In terms of the buzz and anticipation at this week's Masters Tournament, the Spaniard compared Monday's practice day to a final round as a result of all the patrons coming to watch Woods.

"I was playing with Tony Finau on the front nine yesterday and we were about five holes ahead of him. We were on 7 and they were on 2. I've never seen a mass this big even on a Sunday in contention on those two holes.

"It feels like this Monday they let way more people come in because of the last year of limitations and Covid and what everyone has gone through. More people wanted to come out when Tiger is playing. There is a lot more electricity in the air.

"With Tiger there on Monday, it felt like a Sunday at a regular event."

Rahm enters this year's Masters off the back of four previous top-10s at Augusta National and he is hoping this is finally the year that he wins his first Green Jacket and second major title to go alongside his US Open trophy from last year.

"I am feeling good, it's a very different feel to what I had when arriving late Tuesday night last year and playing nine holes and then teeing it up on Thursday," said Rahm, who along with wife Kelley Cahill welcomed their first child Kepa last year.

"It was nice to have a week off last week, got some practice in, and have been able to see how the course is doing and to see the changes. It looks fantastic and I'm excited to get going."

Next Page: How to live stream The Masters for free online