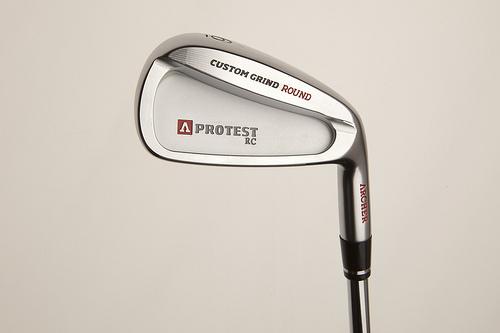 Custom fitting has emerged as a growth area in golf, and Archer Golf claims it has taken the experience to a new level with its groundbreaking Protest irons that promise improvement in iron-play through a unique custom-grind and custom-fitting service.

I found its clubheads have been designed to perform in relation to varying swing characteristics by focusing on an area, it claims, is usually overlooked in club fitting - the way the golfer attacks the ball at impact and the way the clubhead subsequently interacts through the turf.

I’m a single figure golfer but I occasionally hit my long irons a little thin, so the Square clubface suited me. After a couple of stiff practice swings following a tough day at the office, I was eventually able to strike the ball much more cleanly into the simulator.

The Square custom grind also helped me set the club more perpendicular to the leading edge at address and provided me with greater distance and an improved ball flight. The computerised simulator takes note of my swing speed, carry, spin rate, and even shows a slow-motion picture of impact - just like we're used to seeing on the slow-motion TV coverage of Tour events.

The irons also incorporate a weight bar at the base of the back cavity to create a lower, deeper centre of gravity making the iron head much more stable through impact.

Dean Klatt, the brains behind Archer Golf, says: “The Archer Project offers the chance to modify and personalise a set of irons to best suit your game, whether you’re a Tour pro or a 28-handicapper.

“Try the Round, Square and Neutral grinds and you can see the difference by viewing the improved divot pattern and feeling a crisper ball strike.”

Unlike other mass-produced golf clubs, he says, every Archer iron is individually manufactured to a bespoke specification with CNC milling of the raw head.

For more information on the 600 grind combinations, personalised engraving on clubs and other Archer products, visit www.archerproject.com