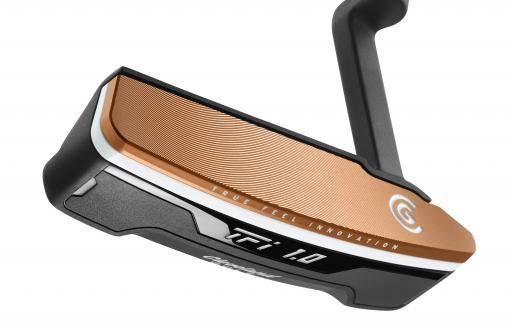 These three eye-catching, tour-inspired designs feature a milled, copper-infused face cap over a copolymer insert for the ultimate in feel and consistency.

This unique combination of materials allows for immediate feedback, from a sound and feel perspective, when striking the ball, whilst the putter’s copolymer insert also creates soft feel and consistent speed across the club face.

Golfers all have different putting strokes, address positions, and club preferences, which makes setting up over the ball perfectly every time nearly impossible.

This inability to set up over the ball consistently leads to misalignment and off-centre hits during the putting stroke.

As a result, Cleveland Golf developed a revolutionary, new alignment technology that allows golfers to correctly align their putt no matter their setup.

By raising the alignment line on the new TFi 2135 putters to the exact radius of a golf ball, or 21.35mm to be exact, Cleveland Golf designers have created the most accurate alignment feature ever for a blade style putter.

The new alignment feature never moves relative to the golf ball because it’s placed at the most optimal position for precision alignment, which is at dead centre of the golf ball.

Regardless of whether a golfer putts with their eyes behind, directly over, or well over the golf ball, Cleveland Golf’s new TFi 2135 putters create perfect alignment.