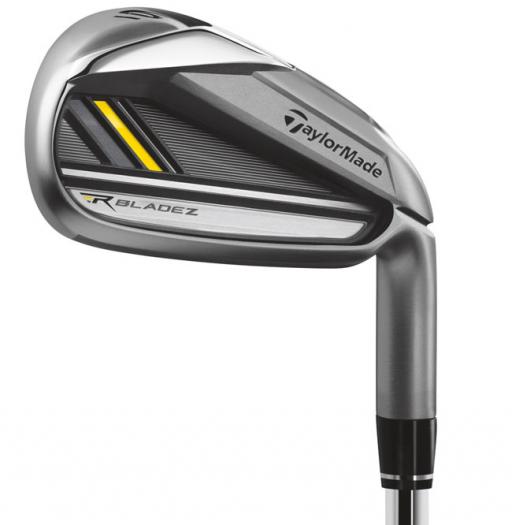 TaylorMade has today unleashed its biggest iron innovation to date with the RocketBladez, pictured above.

RocketBladez’ key new technology lies in its Speed Pocket – inspired by the distance enhancing benefits of the RocketBallz fairway woods and Rescue clubs.

“Metalwoods have advanced tremendously since TaylorMade introduced the first one in 1979,” said TaylorMade’s President and CEO Mark King.

“The ball has advanced too, and even footwear and apparel have improved a great deal. But there hasn’t been a significant advancement in irons since the perimeter-weighted cavity back was introduced more than 50 years ago.

“The Speed Pocket changes that – it’s a once-in-a-lifetime innovation in the iron category. If your iron doesn’t have a Speed Pocket, your iron is out-dated.”

Incorporated into the 3- through 7-irons, the Speed Pocket is a 2mm-wide slot in the sole of the iron that flexes and rebounds at impact, increasing the speed of the face to promote faster ball speed, a higher launch angle and a higher, stronger ball flight that lands on a steep, quick-stopping descent angle.

The Speed Pocket advantage is especially effective on impact made low on the face - TaylorMade studies indicate that 68% of iron shots by amateurs are mishits below the centre of the face. In order to combat this, the Speed Pocket helps to significantly increase ball speed and distance on those low-face mishits.

TaylorMade adds that Tour professionals will also benefit from the distance enhancements of the Speed Pocket, as the company is also offering a RocketBladez Tour iron that delivers consistent distance and is void of ‘hot spots’ on the clubface.

“We created RocketBladez irons for amateurs but when our Tour staff players tried it, they wanted it,” added King. “They love it. It’s the first distance-oriented iron to be played on Tour.

“The genius of the Speed Pocket is that not only does it deliver more speed for more distance, it delivers consistent speed so shots fly a consistent distance. That combination of speed and distance is what made the eyes of Tour pros light up.”

The 3- through 7-irons boast the most sophisticated clubface TaylorMade has ever created for a Tour iron, fashioned from fast, high-strength stainless steel with improved Inverted Cone design.