Gorgeous and all yours from September 1 for just 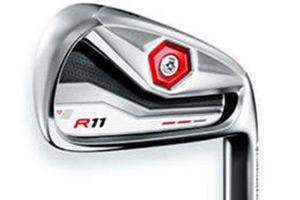 Those rock-hard golf balls sold by the bucket at driving ranges will feel and sound like a soft Tour ball off the face of the latest TaylorMade R11 irons - that's the claim of the Basingstoke club-makers for their latest product due to be available on September 1.

The secret, says TaylorMade lies in a sophisticated cast design of the cavity-back clubhead, which is easy on the eye with a top line 'melting seaml;essly into the hosel.

“There has never been a game-improvement iron that looks this classically beautiful while incorporating this kind of serious performance technology," says TaylorMade Sean Toulon.

Created to compliment the white-headed R11 driver, which proved so impressive in the hands of 2011 Open champion Darren Clarke, R11 irons, say the makers, are engineered for the player who favours a traditional blade but demands the effortless ease required to launch the ball high, straight and long with appropriate forgiveness.

The company says the R11 irons break that mold and re-writes the book about what a high-technology iron can look like, feel like and sound like.

A key feature of the R11, its claimed, is the striking red precision-weighting port (PWP), initially introduced in the Tour Preferred (TP) line which allows TaylorMade engineers to guarantee precise swingweight and ensure  a centre-face Centre of Gravity (CG) location in every iron to promote the best ball flight across all irons in the set.

Other features, in which Nick Faldo has lent a hand, include a thin face for faster ball speed, compact short irons to make them more workable, a sharper leading edge and conforming grooves.