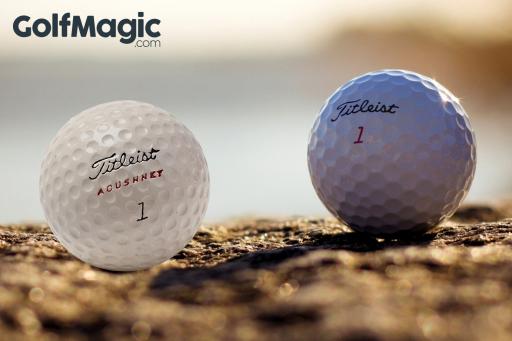 Derived from the word "titlist", meaning "title holder", it is fair to say Titleist lives up to its name when it comes to golf balls.

More than eighty years after the first Titleist golf ball was produced, the company now boasts the world's largest ball factory in Massachusetts with a combined workforce across four worldwide plants of more than 1,100.

Following the recent launch of its new Pro V1 and Pro V1x balls for 2017, we scroll the archives to chart Titleist's rise to the top of the golf ball category...

1932 - Phil Young, founder of the Acushnet Company, complains to his playing partner and dentist that all his triple bogeys were the fault of his golf ball. The dentist X-rays the ball and finds the core is "off centre". Young develops a machine that uniformly winds rubber string around a rubber core, making a "dead centre" golf ball. He names the ball Titleist.

1935 - It takes three years to perfect the first Titleist golf ball. The brand becomes the first to X-ray every ball and to freeze liquid centres to ensure balls stay perfectly round during the winding process. Titleist also develops the industry's first mechanical golfer to test ball flight.

1949 - Titleist is the number one played ball at the US Open for the first time.

1952 - Titleist converts its own nameplate on the golf ball without including Acushnet.

1965 - Titleist conducts wind tunnel testing and computer analysis to evaluate dimple shapes and configurations for the most efficient blend between lift and drag.

1968 - Titleist is the first company in the industry to develop its own dimple molds.

1973 - Titleist makes a breakthrough in aerodynamics by introducing a new "icosahedron" dimple design, which divides the ball into 20 triangular regions.

1975 - Titleist DT is introduced as the longest Surlyn-covered golf ball. Acushnet Golf Centre is created later in the year and regarded as the "ultimate R&D indoor test lab".

SWIPER: HOW MANY OF THESE 90S GOLF BALLS DID YOU OWN?

1992 - Titleist HVC ball introduced as the first two-piece golf ball to ever bear the Titleist script.

2008 - Titleist celebrates its 60th year as the number one played ball at the US Open.

2012 - Titleist Velocity ball is launched, the fastest solid core of any golf ball.

2017 - Titleist launches its "most advanced and best performing golf balls ever stamped with the Titleist script" with the 2017 Pro V1 and Pro V1x.