Golf fans react as unfortunate golfer FALLS into a lake

When you attempt a shot like this there could be consequences, which is what an unlucky golfer soon found out. 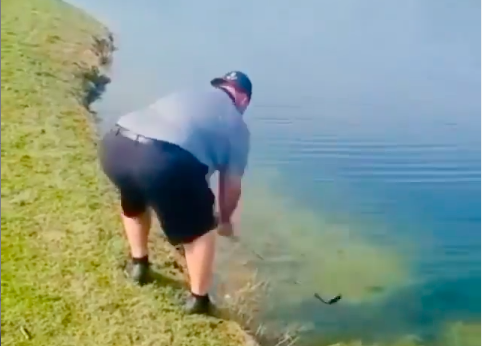 On the PGA Tour, we have seen miraculous shots when a ball has been hit from a submerged position underwater.

Bill Haas' shot from the water on the 17th hole at the Tour Championship in 2011 is one that comes to mind, so when a regular golfer is faced with a similar situation, they can believe they are also capable of this.

However, for one unfortunate golfer whose ball finished in a lake, he suffered terrible consequences for taking on such a difficult shot.

Golf fans on social media commented on the golfer's fall.

"Man looked like he was drowning," one fan said.

"Never mind the shot.... he laid in that water face down like he had been," one fan commented.

"The 'Plippity Plop'," another fan said.

The man took his stance in a perilous position as he got ready to hit his ball from the water, in what must've been a tense situation for him and his playing partners.

The golfer hit the ball cleanly out of the water, I imagine to his satisfaction, but he couldn't keep his balance and as he stumbled on the ground, it was clear the inevitable was taking place.

The man fell face-first into the lake and settled in it for a moment, coming to the realisation that he had embarrassed himself. Luckily, the area of the lake where he fell in was very shallow, so he was safe to climb out.

Although falling into a lake on a golf course is quite a concerning concept, it didn't stop the man's playing partners from laughing and enjoying the moment.