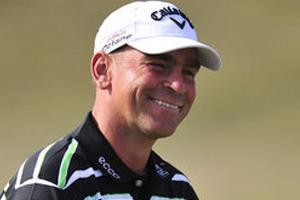 On the eve of the Johnnie Walker Championship at Gleneagles, Thomas Bjorn was being talked about as a future Ryder Cup captain for when the biennial clash heads to Perthshire in 2014.

Eleven months on from serving as one of Colin Montgomerie’s assistants at The Celtic Manor, the 40-year-old Dane left the PGA Centenary course with one eye on a new goal.

Bjorn, who carded a 3-under 69 to join Mark Foster (72), Pablo Larrazabal (69), Bernd Wiesberger (69) and George Coetzee (67) in a marathon five-man playoff, claimed his 12th European Tour title and second of the season after prevailing at the fifth extra hole.

“I didn’t really see this coming after my last two weeks in America,” said Bjorn, who moves just outside the world’s top 50 with the victory.

“With five guys in the playoff, you’re probably as relaxed as you’ll ever be in a playoff because a lot of things have got to go right for it to go your way.

“But the way I played the last three playoff holes, I can’t be more proud of what I did.”

And although the 2012 Ryder Cup European Points List for Medinah doesn’t commence until next week, Bjorn revealed his burning desire to compete in a third match against America.

“It’s going to be difficult to make the side but when you get to my age you always hope there’s one more in you,” added the two-time winning European Ryder Cup player, who becomes the oldest winner of the Johnnie Walker Championship at Gleneagles at 40 years and 209 days.

“I enjoy my golf so much and when you do that, you don’t want to do other things, you want to play. Three years down the line I’ll only be 43 anyway and some would argue that’s a bit too soon to be captain.”

In sudden-death, Wiesberger and Larrazabal were eliminated at the first two holes following bogeys on the par-5 18th, before Foster surrended his third final-round lead of the season after walking out on the fourth extra hole as Bjorn and Coetzee made birdies.

Bjorn then struck a superb 7-iron out of the right-hand rough to 3-feet for his third consecutive birdie on 18, securing the €266,628 first prize and coveted trophy.

Gary Boyd, who spoke exclusively to Golfmagic during the Open Championship, continued his impressive few weeks on the circuit with a final-round 68 to finish in a four-way tie for 11th on 7-under.