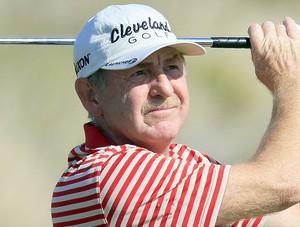 It’s fair to say Tony Johnstone has experienced more than just a life full of birdies and bogeys.

From the high of winning the European Tour’s flagship event of the season in 1991 to the low of being told he would never play the game again after being diagnosed with multiple sclerosis 12 years later, the Zimbabwean has been through it all.

By that time, he was struggling to open a door, had difficulty remembering his own children’s names and could barely walk, let alone play golf.

Yet five years after receiving the crushing news, the short-game expert did the unthinkable and made a miraculous recovery against all odds by lifting the 2008 Jersey Seniors on the European Senior Tour, finishing two shots clear of the chasing pack. A year later, he won the lucrative Senior Masters at Woburn.

In an exclusive interview with Golfmagic, the charismatic African, who lives in Sunningdale with his wife Karen and children Dale and Lauren, reveals how he’s now looking forward to working as a short game coach, as well as continuing his role as a Sky Sports broadcaster and European Senior Tour player.

Tony, having been what you have been through, can you describe how difficult those times were and how proud you were when you came through the other end by winning the 2008 Jersey Seniors?

My wins at the PGA Championship and Qatar Masters were very special wins, but I would have to say the Jersey Seniors was the sweetest.

I was diagnosed in 2003 and was told I was never going to play again. That was one of the hardest moments of my life. I lost my memory, couldn’t remember my kids names and lost all my co-ordination.

When my left side went numb, I thought I was having a stroke but it was diagnosed as a viral infection and I was given steroids, which did help for a short while.

But two months later, my co-ordination deteriorated and my golf game vanished. My short-term memory began to suffer, too. I’d ask my wife the same question ten times over and once forgot my son’s name. I’d speak to people, then greet them like long-lost friends moments later.

Thankfully, I had a clinical trial involving Alemtuzumab. It was a complete miracle. The drug is used to treat leukaemia but as a three-year trial by Cambridge University, it is also an effective treatment for MS - not just halting, but repairing the damage caused by the disease.

I am extremely thankful. It then opened the floodgate for another victory a year later at the Travis Perkins Senior Masters at Woburn. The very next day, my MS Society Pro-Am at Sunningdale raised more than £100,000 for the charity. What an incredible few days.

How are you enjoying your time as a Sky Sports golf commentator? You seem to know plenty about the local wildlife.

I absolutely love it. Working alongside the likes of Richard Boxall, Wayne Riley and Ewen Murray is always a pleasure.

It’s great to give my insight into my home tournaments in Africa, albeit on top of my knowledge of the local birds. I will be in the booth for a few more events later in the season, which I am really looking forward to.