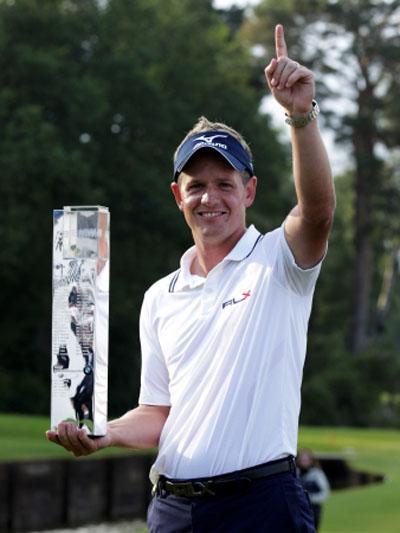 We’ve all, at some time suffered with the yips and the shanks but Mizuno is warning its potential customers to look out for the Luke Donald disease - a strain of which was first diagnosed last year by over critical pundits who reckoned the Englishman was incapable of winning enough tournaments merely compiling loads of prize-money.

Now, it seems, following Donald’s victory in the BMW PGA Championship at the weekend and his emergence as the new World No.1, there’s a new strain of LDD. And the Reading-based, Japanese-owned company has put out a statement re-assuring its customers that it’s ‘a rare conditions, very few cases have yet been confirmed’ and ‘that it can pass without long term effect.’

The statement continues: “The symptoms establish themselves quickly.  An early sign is that you may hold your follow through longer than normal.

“A heightened sensation at impact is soaring straight irons, improved distance control and consistency from round by round.

It continues: “For most sufferers LDD is short term.  The full effect may only be noticeable for two or three rounds.  Carriers will notice symptoms throughout their golfing life – often coinciding with the purchase of new equipment.”

Mizuno suggests that victims do not contact their doctor while revealing that custom-fitted owners of Mizuno grain flow forged irons, hybrids and wedges appear to be the most common carriers of LDD.

The company says one of its most frequently asked questions is how can anyone tell if their Mizuno products carry the disease?

The response is unequivocal: “You will only know during use. And even if fitted for Mizuno irons and wedges, you may unfortunately have a natural resistance to LDD.  But as a carrier you may infect your playing partners.”

Apparently a help group is being set up where victims may talk to other sufferers of the disease. Visit www.mizuno.eu for more information.

Golfmagic
luke donald
Mizuno
Previous
Putting: Learn the Stockton way
Next
Get back on track with Plaser