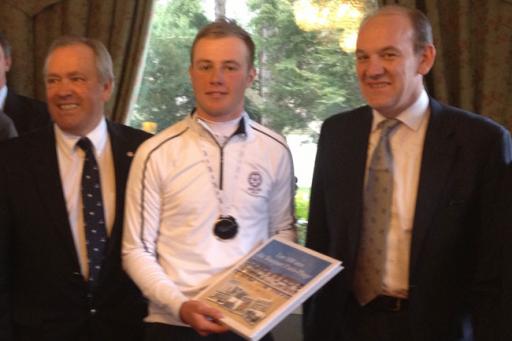 The 16-year-old reigning English amateur champion, who started the year by reaching the final of the French International Boys’ Championship at Le Touquet, maintained his fine form by carding rounds of 72 and 68 before beating Singh Brar on the third extra hole.

Ellis first hit the headlines last summer when becoming the youngest ever winner of the English Amateur Championship at the age of 16 years, 11 months and 28 days – a feat that broke the previous record set by Sir Nick Faldo back in 1975.

Ellis is by no means the only Meon Valley youngster to have been making news of late, however.

While Ellis was winning the overall title at Corhampton, his 13 year-old club-mate, George Saunders was recording rounds of 78 and 79 to claim the Royal Guernsey Cup awarded to leading Under-14 competitor in the field.

A few days before, Meon Valley’s Emma Allen earned her first international cap when she represented England at the Scottish Under-16s Girls’ Strokeplay Championship at the Strathmore Golf Centre where she finished sixth in the individual event after carding rounds of 74 and 72.

The talented 15-year-old is the current Ladies’ County champion and up to a few weeks ago had also held the Junior County title - a feat that has not been achieved since 1970.

And that’s not all, as a fourth Meon Valley scholar in 17 year-old Mason Banger won the recent North Hants Junior Open.

“I might be biased but I genuinely believe we have something special going on with our juniors here at Marriott Meon Valley,” said director of golf George McMenemy.

“Harry is clearly the best-known of our youngsters after what he did at Silloth-on-Solway last summer but he’s by no means the only one to be playing well. Emma, Mason and George are also all progressing nicely and there are a lot more coming through behind them.

Meon Valley is unique in that it is the only Marriott UK resort to operate a Junior Scholarship Programme. It was established in 2005 and to date there have been 25 scholars.

Richard Hayward, Meon Valleys’ junior organiser, believes the decision made by McMenemy and the previous junior organiser Pat Griffin to introduce the Scholarship Programme has had a tremendous impact on junior golf at Meon Valley.

“It has played a vital part in the success our youngsters have achieved,” said Mr Hayward. “There’s a fantastic team spirit within the junior section here at Meon Valley and everyone is working together to develop better players.

“We’d like to think the success players like Harry, George, Emma and Mason have achieved is only the start. The introduction of the Junior Scholarship Programme has certainly given us a firm foundation on which we can build for the future.”