My golf by 'Ashes to Ashes' TV star 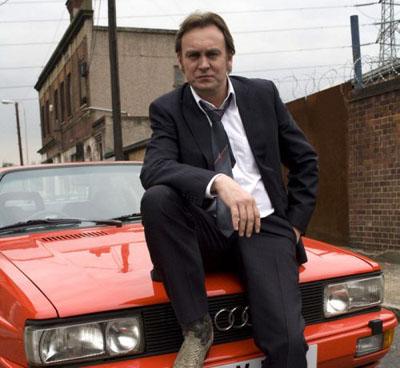 The final series of 'Ashes To Ashes' starts on Friday on BBC1 and Philip Glenister who plays the main 1980s character, police detective Gene Hunt, has been talking about his love of golf.

And in a special feature in the Mail on Sunday magazine, he reviewed some of the latest drivers, though the article infers he wasn't custom-fitted for any of them (as the manufacturers recommend), merely supplied with clubs with lofts and shafts similar to his preference.

Viewers of the recent Sport Relief sketch involving Glenister and his fellow Ashes characters will have noticed that he has a very aggressive, yet fluid, golf swing and even Sam Torrance. playing a cameo role, looked impressed

"I like to get out on the course  to play as much as I can," says Glenister (47), who has a 12 handicap from the Richmond Golf Club where he's a member.

"I've been playing since I was a teenager and first got into it playing pitch and putt with my [film director] dad, as something to do on a Saturday morning and to keep me amused and get me out of the house.

When I got better and moved up to playing proper 18-hole courses, I joined Richmond Golf Club and the Stage Golfing Society, reputedly the second-oldest golf society in the country, after the Old Etonians."

Glenister admits he's not technically-mind with golf clubs equipment but knows what he likes and loves to give it a qhack off the tee.

He found the Nike driver, with its adjustable head, least to his liking. "It feels like a long hitter's power tool and I didn't like the high putch sound it made off the face. I'm a natural drawer of the ball but found I was hooking the ball with this club and losing distance. Perhaps I should have adjusted the head but it's all a bit technical and I'd rather just play golf. It's a good-looking club, but it just didn't do it for me."

Of the TaylorMade R9 he commented:  "You'd probably expect me to make that  my top choice because a lot of the players on the pro Tours speak very highly of it. It's a beautiful looking club and I was praying it would work for me, but I just couldn't get on with it.

I couldn't generate the clubhead speed necessary to get the best out of it. And that's probably down to the fact that, although it has a 10.5-degree face and regular flex, it's just a bit too advanced for me and more suited to the pros."

He added: "It was quite frustrating, because I really wanted to like this club. It's very tasty, very meaty and looks great. I was getting the distance, but just not hitting it straight. To compensate I aimed left, sliced it and lost distance. Playing through the wind, as soon as you hit a shot like that, you sky it, it hangs up there and you're going nowhere."

So it was the Cobra ZL, a similar model to that used by Ian Poulter on Tour, that turned out to be the best for the golfing actor, whose brother Robert plays the fixer 'Ash Morgan' in the equally successful BBC series 'Hustle'.

"When you catch it just right, it's great," said Philip, "They haven't messed around with the design too much, just stuck to what works. The weight distribution of the head felt good,  I could generate the clubhead speed and I was hitting far more accurately than with either of the other two clubs I tried. I was getting the distance I was hoping to achieve.

It was also a lot more forgiving, too. Because of the shape of the club head, I could align it more easily, more naturally. I liked the sound it makes, too. I had a feeling of confidence over the ball that I didn't have with the Nike or the TaylorMade. To me, it's just a proper golf club."

I like to get out on the course  to play as much as I can...I've been playing since I was a teenager