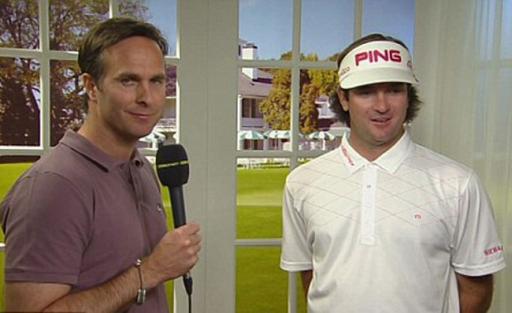 While I have little interest in cricket, I know who Michael Vaughan is. He’s the former England captain, apparently. Not a golf correspondent.

Asked why an earth the BBC would choose to hire Vaughan to interview the leading players as they came off the hallowed turf, the corporation replied: ‘Michael plays golf and knows it well’.

So well, in fact, he called Tiger Woods a ‘three-time Masters champion’, to which Woods and the rest of the golfing public replied ‘Four, actually.’

He then made audiences cringe further when asking Rory McIlroy and Sergio Garcia to re-enact their on-course hug from the 12th green live on TV. If anyone was in need of a hug, it was the interviewer.

The BBC, which is battling to keep hold of its sports rights, is under pressure for its heavy use of former sports stars in place of experienced journalists.

But it wasn’t just Twitterverse who were bleating into their iPhones, as even Vaughan himself realised he was out for a duck.

“It was a mistake I shouldn’t have made, especially to someone like Tiger Woods. If I learned anything over the last week, it’s that if anyone gives you a stat, make sure you back it up and check it out. I looked in the stats book, saw three of his wins, and thought that was it.”

Yes, the incident with Tiger was light-hearted, but you could tell deep inside that Tiger was rather bewildered. Woods is reportedly a huge fan of cricket, but the 14-time major champion almost definitely doesn’t know how many Test centuries Vaughan has scored. But then the Beeb aren’t asking Woods to commentate on The Ashes...

Appointing Vaughan to interview the world’s best suggested the BBC has already conceded the golf battle to Sky Sports, who acquired the services of Jack Nicklaus, Colin Montgomerie and David Howell to name just three, as well as 3D coverage.

BBC will only show eight days of live men’s golf in 2012 - the weekend coverage just gone from The Masters, all four rounds of The Open and the weekend at the BMW PGA.

“It’s sad. It’s the end of an era,” said the 82-year-old. “The racing has gone, the F1 has gone and yet we still have things like the Boat Race.

Sky or BBC: Which was your broadcaster of choice for Masters weekend?