Scottish legend reflects on his time as captain, his favourite playing partners, and why the Americans are such ungracious losers... 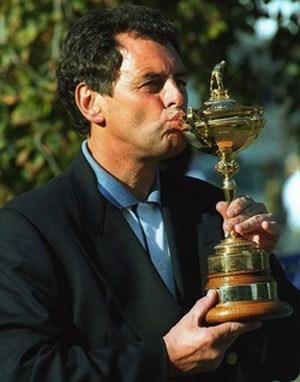 When it comes to learning about the history of the Ryder Cup, there are no better Europeans to speak to than Bernard Gallacher.

The 63-year-old Scot, who played in the biennial event on eight occasions and captained three European sides, sat down with Golfmagic at Wentworth to reflect on his time as captain, his favourite playing partners, and why the Americans are such ungracious losers...

Bernard, could we begin by learning how relieved you were to win the Ryder Cup as European captain in 1995 after being denied victory ever since 1969?

It really meant a lot. Before we became a European side, the Ryder Cup meant a lot to British and Irish golfers because I was born in an era where America dominated with the likes of Ben Hogan, Jack Nicklaus, Arnold Palmer and Tom Watson.

It was a dream to play in the Ryder Cup eight consecutive times from 1969 to 1983. Making the team, almost overruled winning tournaments.

The first time I didn’t play was in 1985 and it was ironic that we won that year. But I wasn’t disappointed; I was delighted for European golf. It proved a catalyst for things to come and helped grow the European Tour into what it is today.

I then moved on to the captain’s role and lost both times in 1991 and 1993. That really was frustrating because we came close in both matches. But eventually we beat them and it was the icing on the cake to win on American soil at Oak Hillin 1995. Up until that time, we had only ever beaten America on their turf in 1987 at Muirfield Village.

You were trailing by two points heading into the final-day singles at Oak Hill. Paint a picture for us of what it was like in the European camp that morning?

There was a lot of optimism in the team room. We felt as though we had been unlucky to be behind and we were determined to make amends.

I think tactically we got it right. I wouldn’t say it was straight down to me, but we needed to get off to a fast start and so we wanted to get the best players close to the front to get points on the board.

It was my job to keep the mood upbeat and to feel optimistic, but it was also great to have plenty of experienced players in the team room who were prepared to speak up and rally the guys.

I asked my team to do a big job and they delivered. Although Seve Ballesteros lost the first match, we bounced back with wins from Mark James, Howard Clark and then picked up four wins in the middle from David Gilford, Colin Montgomerie, Nick Faldo, Sam Torrance and then Phillip Walton delivered the winning point.

So is it fair to say your winning speech was well rehearsed?

You could say that! It was obviously a very emotional moment but not long after Phillip Walton won the last match and I lifted him into the air, we were shepherded onto the closing ceremony and the Americans just wanted to get out. They’re such ungracious losers, you know!

I got up and did my bit. I thanked the Americans for their hospitality and praised all of my players.

But it was actually my good friend and the then United States captain, Lanny Wadkins, that I felt sorry for. I think Lanny had only ever been on two losing sides in his last eight appearances and he didn’t really know what to do. This was also his first time as captain. He got up but he just couldn’t speak. He was looking at his notes and nothing was coming out.

Spontaneously, I got up and put my arm around him and said: ‘Lanny, do you want me to help you through this, I’m used to it.’ That got a reaction from the gallery and I think that sort of bucked him up.

Interview continues. Click here to find out what was Gallacher's hardest job as captain...