A PGA Tour pro has called for players to start receiving contracts after the emergence of the controversial LIV Golf Invitational series. 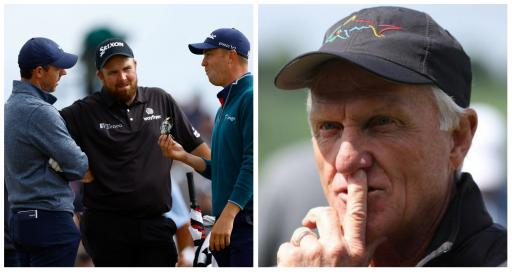 The emergence of LIV has undoubtedly rocked the status quo and apart from readying their lawyers the PGA Tour may need to change in other ways to adapt to the changing landscape of professional golf.

Of course, by now you will have heard that apart from the guaranteed prize money in the 48-man, no-cut, 54 hole events there are lucrative signing-on fees.

By far in a way the biggest name who plays for LIV Golf is six-time major champion Phil Mickelson.

Mickelson, 52, who last week welcomed legendary on-course announcer David Feherty to LIV from the jungle, is said to have been paid as much as $200million for his services in what is likely a multi-year deal with the Saudi-backed series.

Elsewhere, Dustin Johnson, Bryson DeChambeau and Brooks Koepka are all said to have commanded signing-on fees north of $100million.

And whilst the PGA Tour "compete in dollar bills" with LIV, players should start getting contracts, according to one anonymous PGA Tour pro.

This pro spoke to Golfweek's Eamon Lynch for his latest editorial. You can read that here.

Lynch has been one of the strongest critics of the LIV series. He's given Greg Norman unflattering nick names and in the past has absolutely torn Mickelson and the LIV defectors to shreds, accusing them of being puppets for the Saudis.

"Fans don't know where PGA Tour stars are going to play week in and week out, sponsors don't know what they are buying, and ditto for NBC/CBS. If you can create 12-14 'big' events where the stars have to sign up for a majority of them, say 10 of 12 or 12 of 14, plus majors and a couple more then that starts to look more attractive to sponsors, TV and fans. The era of maximum playing opportunities needs to go and the era of the best against the best more often needs to start."

What do you think? It has long been the norm in professional golf that it's a cut-throat business. You have to play well to earn.

And if you don't perform, then tough luck. Onto the next event.

What is the latest LIV news?

Henrik Stenson was stripped of his Ryder Cup Europe captaincy after signing up for LIV.

This is what he had to say about it all.

LIV have also announced that they've acquired the services of David Feherty, the legendary caller.

There are rumours that former CBS analyst Gary McCord could soon be part of LIV, along with former NBA player Charles Barkley.

The third LIV Golf event is due to take place at Trump National in Bedminster, New Jersey, this week.