Cameron Smith refused to rule out a shock move to LIV Golf after winning the 150th Open Championship at St Andrews. 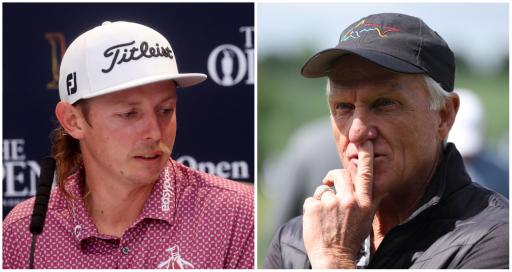 Cameron Smith refused to rule out a move to LIV Golf as he spoke to the media after raining on Rory McIlroy’s parade to claim the 150th Open Championship at St Andrews.

Smith, 28, was reduced to tears as he cradled the Claret Jug and thanked his team, the R&A and the fans for the most memorable week in his career.

He came to the media room immediately after claiming his maiden major and one reporter, an Aussie, fired a blunt question straight at the champion golfer of the year about whether he would hop over to play LIV Golf.

Smith was none too pleased with the query. There were rumours swirling in the lead up to the landmark major that the Saudi-backed league had secured the services of an OWGR top-10 player.

Patrick Cantlay was linked. He has previously said he was a “curious observer” of developments. Even Jordan Spieth had to release a statement to deny rumours circulating about him.

In response to the question, Smith replied: "I don't know, mate. My team worries about all that stuff. I'm here to win golf tournaments."

"I just won The Open, and you're asking about that. I think that's not good," he added.

The topic of LIV Golf largely stayed away from this Open. Ian Poulter got irate when he was asked about allegedly being booed.

In a press conference, R&A chief executive Martin Slumbers said that it was not on their agenda to ban players.

However, he did say that they will look at qualifying criteria going forward. “There’s no such thing as a free lunch,” he said.

In more recent developments, Sergio Garcia has confirmed that he is resigning his membership from the DP World Tour.

He has not made this move official as of yet but told the media he will do so soon.

Garcia told the media that he had “not enjoyed” his week at St. Andrews.

"Honestly, I want to play where they love me. I like to feel loved and sincerely in the European Tour. I don’t feel loved now,” he said.

This will now mean he will no longer be able to be selected for the Ryder Cup. He is the leading points scorer in history.

In more shocking news, Swedish media report that Henrik Stenson’s alleged move to LIV Golf is all but done.

Jon Rahm has leapt to the defence of Garcia, explaining that he felt the treatment of the Spaniard was “a pity”.