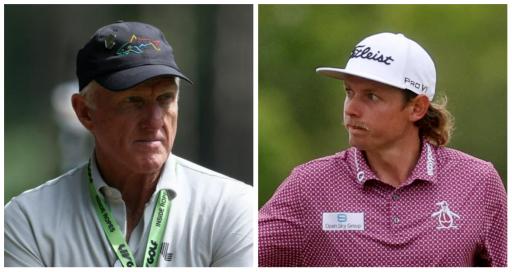 No sooner had Smith, 28, claimed the Claret Jug at St Andrews which reduced him to tears, he was asked what his future plans were.

In his winner's press conference, Smith was involved in an awkward exchange with an Australian journalist that will make the PGA Tour shudder.

Smith was pressed on whether he would be joining LIV Golf, fronted by two-time Open winner and fellow Aussie Greg Norman.

Here's the full exchange if you missed it:

Q. Cam, apologies for having to bring this up in these circumstances, but your name continues to be mentioned, has been mentioned to me this week about LIV golf. What's your position? Are you interested? Is there any truth to suggestions that you might be signing?

CAMERON SMITH: I just won the British Open, and you're asking about that. I think that's pretty not that good.

Q. I appreciate that, but the question is still there. Are you interested at all? Is there any truth in that?

CAMERON SMITH: I don't know, mate. My team around me worries about all that stuff. I'm here to win golf tournaments.

Imagine what a punch in the gut it would be if Cam Smith joined LIV.

2. Apparently he lied to us when he said he was “pretty set/happy” with what he already has and sold out.

Like Rory said, all you have is your word.

Hearing 90 million was the number. I guess that could make ya do some rethinking!

Of course, at this moment in time it is all speculation. But we are expecting more LIV Golf announcements soon.

Casey, 41, will make his LIV debut in New Jersey from July 29-31 at Trump Bedminster.

It was reported during the week that Casey and other LIV players will resort to playing Asian Tour events to gain world ranking points.

In other recent developments, it has been reported that Ryder Cup Europe captain Henrik Stenson is close to joining LIV Golf.

Sky Sports' golf correspondent Jamie Weir reported immediately after Smith won at the Old Course that Stenson will be announced.

That decision would see him stripped of the captaincy. Sergio Garcia has also confirmed that he will resign his DP World Tour membership.

"I don't feel loved," Garcia admitted after saying that he did not enjoy his week at St Andrews.