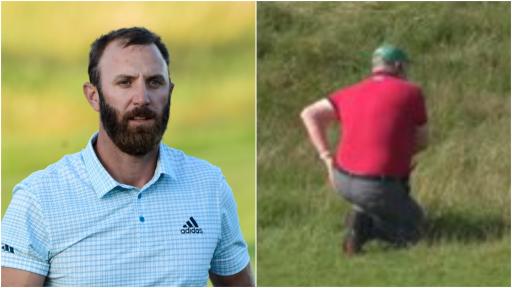 Dustin Johnson struck a course marshal on the backside with his approach shot into the par-4 4th hole on day three at The Open.

Johnson, the current World No.1, found the deep stuff off the tee and then hacked his second shot long and left of the green as his ball clattered into the backside of the innocent course marshal watching on. The ball then motored over the other side of the green.

It would lead to a bogey-five for Johnson, who is trying to chase down the leaders on Saturday as he goes in search of landing his first Claret Jug.

Johnson, a two-time champion, finished joint second behind Darren Clarke when The Open was last staged at Royal St George's in 2011.

Some fans were irritated that Johnson did not even shout 'FORE', albeit his caddie and brother Austin did point to the left as the ball was in the air.

Dustin Johnson hits someone and not a single shout from either him or his caddie. Not good enough. #TheOpen

OMG Dustin Johnson just hit the steward in the arse

Ouch - World’s No. 1 Dustin Johnson just nailed a course worker on the fly at @TheOpen

Dustin Johnson just played a shot off some dude’s ass.

Dustin Johnson and his caddy's exchange after approach shot on the 4th hole #TheOpen @ShooterMcGavin_ pic.twitter.com/yupEdw1s5G