Fred Couples on Tiger Woods chances at 150th Open: "He knows he can win"

Tiger Woods has won two of his three Claret Jugs at St Andrews and his close friend Fred Couples talked up his changes ahead of the landmark championship. 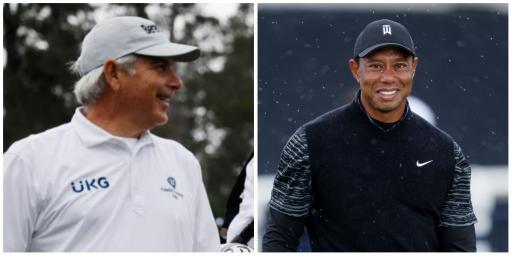 Speaking on his Fred Couples Radio Show on Sirius XM, the popular American revealed he speaks to Woods every day and was encouraged by the way the 15-time major champion was talking about his game.

Woods skipped the US Open at The Country Club in Brookline, having withdrawn from the US PGA Championship, to allow himself to prepare for The Open at the home of golf.

The 46-year-old won the Claret Jug at the famous venue in 2000 and 2005 and his close friend Couples believes he could produce more magic on a course where he clearly feels at home.

"I talk to him every night and when he tells me things, you know, some are top secret. But when he talks about his game, he says, ‘I am driving it really, really well. I’m putting well,'" Couples said.

"And again, at St. Andrews, if he does his deal, he’s one of the best iron players to ever play, if not the best. And if he’s not striping four irons into par fours, but he’s got nines and wedges, I honestly think he knows that he can win this thing."

Woods will tee off at 2.59 pm with US Open champion Matt Fitzpatrick and four-time PGA Tour winner Max Homa in the first round in what is a marquee group.

Having made a sensational comeback to professional golf at The Masters in April, Woods finished in outright 47th place having battled bravely to make the cut.

But as the week grew on, he fatigued and his body also couldn't handle the tough conditions of Southern Hills at the US PGA in May. St Andrews should not only suit his game, but his body as well.

Next Page: Justin Rose FORCED OUT of 150th Open Championship with injury