Max Homa had the funniest reaction to the news he was playing with his idol Tiger Woods at the 150th Open Championship. 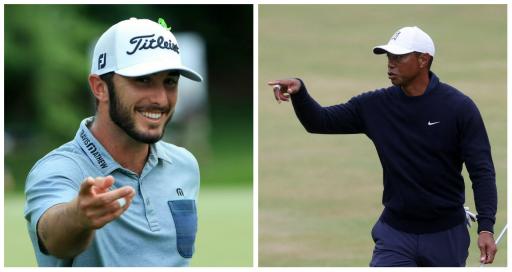 It’s safe to say the fact Tiger Woods is playing with Max Homa at the 150th Open Championship at St Andrews means more to one person.

And that person, of course, is four-time PGA Tour winner and Tiger fan boy Homa.

Unsurprisingly, the Los Angeles native counts Woods as his hero.

Nearly a decade ago, Homa reached out to the now 15-time major champion on social media to ask for a practice round.

This was because he had just qualified for the U.S. Open and like Woods had just won the PAC 12s NCAA Championship. Tiger also won that tournament.

It was wishful thinking at best, and it never happened. You’d imagine Woods is a man in high demand.

“I Tweeted big cat,” Homa previously told the No Laying Up podcast. “Me and him, and Phil [Mickelson], no big deal, are like the only people who ever did this so I thought maybe this would connect us a little bit.”

He added that his post was more of a humble brag to “the twittersphere”.

“It [the tweet] got a decent amount of traction,” Homa added.

Homa claimed that one of Woods’ team did end up contacting him.

@TigerWoods just won PAC 12s, NCAA championship, and qualified for the us open. Any chance I can get a practice round with u?? #hero

Here's @maxhoma23 in 2018 talking about trying to track Tiger down for a practice round.

This was when he was playing on the Korn Ferry Tour.

Now he's gonna tee it up with Tiger f'n Woods at the Old Course in The Open Championship. pic.twitter.com/YQ4ojyuJRF

He was driving at the time and had to swerve to the side of the road and put his blinkers on because he was so excited about the potential of playing golf with Woods.

“My heart was racing, I honestly thought that he [Woods] was going to ask me to, like, be his best friend and move out to Florida.

“I thought that a consolation prize would be this practice round.”

Apparently, Woods only turned down the practice round because he was taking his U.S. Open preparations seriously but he “really wanted” to meet Homa.

“There’s no way this is true,” Homa joked at the time.

“It honestly might have just been a prank call.”

You might remember that Homa did get the chance to spend some time with Woods when he won his tournament, the Genesis Open, in 2021.

But now, he will get the chance to tee it up with Woods at the 150th Open. Matthew Fitzpatrick, the reigning U.S. Open champion, makes up the three ball.

We’re not exactly sure how Homa will be feeling when it comes to 2.59pm Thursday at the Home of Golf.

But it’s safe to say, he will be absolutely pumped.