The Open: Justin Rose has hilarious new approach to the bunkers

Justin Rose appears to be taking a unconventional approach to the punishing pot bunkers at St Andrews ahead of The Open. 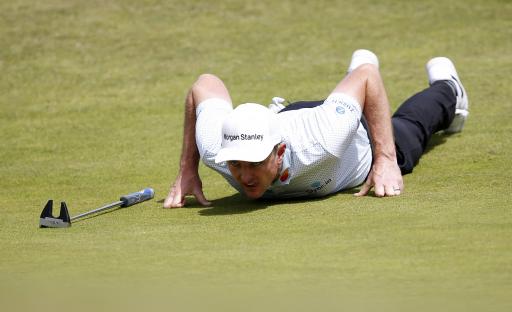 Justin Rose looks to have an entirely different approach to the bunkers this week ahead of The Open Championship at St Andrews.

We might have to check with the R&A but at first sight this doesn’t look entirely within the rules.

Rose has posted a clip of his practice round inside one of the Old Course’s famously deep, punishing bunkers.

His golf ball doesn’t quite manage to get out so instead Rose just one-arms it on the putting surface after catching it.

If in doubt.. chuck it out!! #TheOpen @TheOpen @RandA pic.twitter.com/9jMPeoUgHF

How’s that for ingenuity?!

We jest, of course.

But it will be interesting to see some players take on the Old Course for the very first time.

Perhaps they might want to use the Rose approach.

"It's hard to get the ball three feet from the hole... it really is"

Rose, 41, revealed to The Scotsman this week that he arrived early at St Andrews to take it all in ahead of the landmark major.

He claimed that he did not believe that the Old Course could be overpowered by the likes of massive hitters such as Bryson DeChambeau.

The forecast for the week appears to be hot and dry. A firm Old Course could see some players go very, very low.

Justin Thomas wasn’t super confident in predicting a winning score but reckons it could be 12-under par.

Rose told the paper he believed that it would be “sacrilege” seeing a player shoot below 60 this week.

But he added: “But I actually think, though, that it has an amazing way of defending itself.

“Just playing there in practice rounds, it makes you aware that angles are so important and the weather as well.

“It is very hard to get the ball three feet from the hole there, it really is.

“On a lovely day, you can play it feeling you are not going to make too many bogeys but to get the ball in the hole is not that easy at St Andrews.

“The greens are subtle enough that making putts isn’t that easy, either so it has its defences. I think it’s the firmness that’s going to save it.

“If they do put pins near the bunker edges where there is a little bit of tilt, 15-20 feet is going to be a good shot a lot of the time.”

Rose said that he still feels he has a little bit more in the tank.

His game is not where it needs to be, he conceded, but he feels he can get his game back to the point of where he can contend in majors.

Next page: Tiger Woods criticises LIV Golf players ahead of The Open