Justin Thomas says even before Tiger Woods started playing again he was adamant he was going to beat him at St. Andrews. 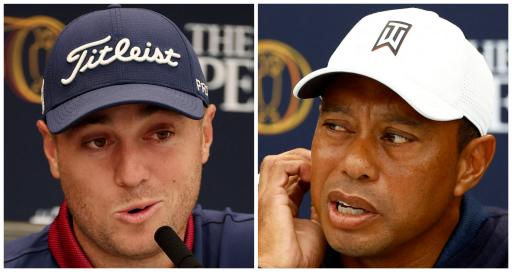 Justin Thomas says Tiger Woods reminded him “many times” he was going to beat him at St Andrews even before he started playing again as he recovered from his car crash.

Speaking ahead of the 150th Open Championship at the iconic Old Course, Thomas admitted that he “cherishes” his relationship with the 15-time major champion.

Woods previously described two-time major champion Thomas, 29, as like a little brother to him and an older one to his son Charlie Woods.

Thomas was one of the first players to confirm that the 46-year-old was planning on making a comeback when it was all quiet on the Woods front ahead of The Masters in April.

He revealed just how bad the sight his leg was after he overturned his Genesis SUV in February 2021 which left him with a 50 per cent chance of needing to have his leg amputated.

But now both players are here ahead of a monumental week. Woods was even ribbing Thomas with one-liners as they practiced well into the evening on Monday this week.

Thomas said Woods reminded him “quite often” that he planned to play at St Andrews at the Old Course.

“Yeah, he reminded me many times that he planned on beating me here at this tournament for quite a while,” he said.

Even before he was playing again?

More: My leg is different now, says Tiger Woods ahead of The Open

He continued: “I just think it was the most realistic timetable that he had, but it just so happened to be that he was ready earlier.

“But I know that if you could have told him at the beginning of the year you had one event to play in and one event only, I think – which sounds like he made apparent in his press conference – and I would also say that it would have been here.”

Thomas was again asked about LIV Golf. Woods even went in hard against the players who have turned their backs on the PGA Tour in favour of the lucrative series.

How fed up is Thomas of the LIV Golf chatter?

He said: “It’s very, very tough thing because it is, it truly is one of those things that the more you talk about it, the more traction it gets.

“But I think it’s very obvious why we’re sick of talking about it because it is, it’s taking away from a lot of – whether it’s great storylines or just great things happening in the game of golf.

“I mean, the U.S. Open was such a shame in the beginning of that week because there were so many other great storylines that should have been going on, but instead it wasn’t.

“And I think that’s probably what some of the frustration is from guys, answering a lot of the same questions.

“But at the end of the day, I know myself – I understand why y’all ask, like you have to. It’s part of your job. And you just genuinely want to know.

“Just like we want to know when we ask our friends, our peers, any of y’all what you think.

“It’s just part of it. And it’s the unfortunate spot and time that we’re at right now. But hopefully there will be a time and a place when we can just focus on and talk about the evening going on and not other stuff elsewhere.”

Before he left his press conference, Thomas spoke of his chances this week.

He is playing alongside Shane Lowry and Viktor Hovland in rounds one and two, teeing off at 10.09am BST on Thursday.

Thomas has not played an Open here before and he said he will be heavily reliant on his caddie Jim “Bones” Mackay.

The American has previously spoken of how Bones gave him a memorable pep talk ahead of the final round of the PGA Championship at Southern Hills when he snatched victory away from Will Zalatoris.

“I feel confident that I will have more success in the future,” Thomas said. “And hopefully it just starts this week.”

Next page: Full tee times for rounds one and two of The Open