Bryson DeChambeau has revealed how he has already spent some of the money given to him in his lucrative LIV Golf deal. 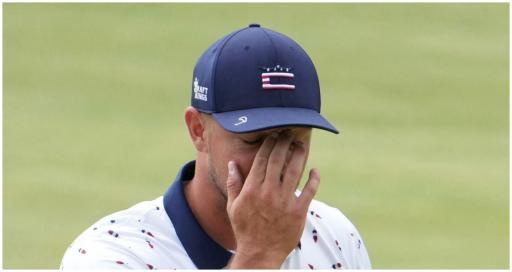 Bryson DeChambeau has joked that he’s broke after signing for LIV Golf in a deal worth more than $100m because of all the investments he has already made.

When DeChambeau became a LIV Golf signee he told reporters that he would have “a new type of legacy” as he revealed what his plans were.

One of those plans is building a multi-sport complex, complete with a driving range. And it appears DeChambeau, 28, has already made that investment.

He recently joined the Country Club Adjacent podcast where he confirmed some of the things that he’s already done with the money he received in the lucrative deal.

DeChambeau told the podcast: “What’s cool about it though is that I’ve already put it [the money] in places that make sense, whether it’s my foundation, or real estate, being able to build a multi-sport complex, or taking care of my family, taking care of what we’ve got going with our content creation Regecy, numerous other things too.

DeChambeau became one of the highest-profile LIV Golf signees when he was announced during the first $25m event at Centurion Club just outside of London.

Since then, he has been joined by Brooks Koepka, Patrick Reed, Pat Perez, Abraham Ancer, Carlos Ortiz and Paul Casey.

Speaking ahead of the Genesis Scottish Open, Rory McIlroy again touched on the topic of LIV golf, urging the three main parties involved to sit round the negotiating table to work it all out.

DeChambeau spoke to the media about his decision before the second LIV Golf event in Portland. He struck a different tone to Perez and Reed, who absolutely ripped into the PGA Tour.

The 2020 U.S. Open champion has always insisted that his decision to join LIV Golf was a “business decision” and claimed it would be an honour to continue to play on the PGA Tour.

What did DeChambeau say about joining LIV Golf?

"One of the things for me it was a personal business decision. For me I run and operate my golf as a business as well as wanting to be one of the better players in the world. Second off, it was going to give me more resources and opportunities to reinvest in my local community, in Dallas, and back at my original home in California where I can do things for junior golf tours, improve my foundation, and also build the multi-sport complex I'm going to build here shortly in Dallas, and also give me more time to rest, the ability to have weeks off and recover my body in the way I want to so that I can be prepared to give it my all when it comes time, not be depleted every week and continuing to get depleted over the course of time.

"So that was one of the things. And then the last part is I saw that first event in London and how much fun everybody was having. That was exciting to me. And I wanted to be a part of something like that."

Next page: Jon Rahm finally got his dissertation from Tiger Woods