The LIV Golf players offer their brief thoughts on what it's like playing the 150th Open Championship at St Andrews. 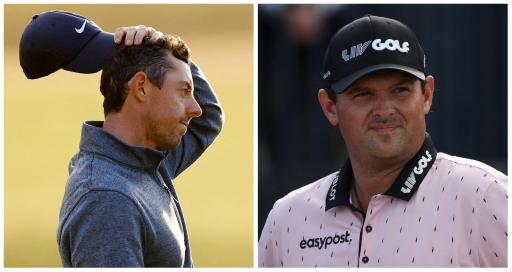 If you hadn't noticed, the coverage of this year's 150th Open Championship at St Andrews has tried desperately to shut down LIV Golf talk.

That's absolutely fair enough. This major feels different and the talk should be about the great storylines that are developing on the Old Course.

Yet LIV Golf chatter chatter still hovers over this major like a storm cloud. The R&A must be desperately hoping the LIV players in contention fade away.

Dustin Johnson is right there, Talor Gooch is also lurking in the background before moving day. Sergio Garcia is also primed to make a move.

Lee Westwood and Ian Poulter also fared well on days one and two. Patrick Reed is decked out in all of the LIV Golf gear.

Bryson DeChambeau is not done and made a charge on Saturday.

Phil Mickelson missed the cut. He shot four better than Tiger Woods over two days but you wouldn't know it based on the coverage.

One of golf's greatest entertainers, a six-time major champion, has been reduced to a footnote as we celebrate the oldest major in golf.

Let's be honest, this was the last time we were likely to see Lefty in a major at St Andrews and what farewell did he get?

He breezed over the Swilcan Bridge and never stopped. The grandstands? They were essentially empty. There was a smattering of applause.

More: What Rory McIlroy did to make Tiger start blubbing

Afterwards, Mickelson declined to do any media interviews. In the earlier part of the week, Mickelson grew frustrated with a reporter.

"Just let it go," Mickelson told the reporter when pressed about deciding to skip the annual champions' dinner.

It's fair enough. Mickelson is stuck between a rock and a hard place. He has made his $200million bed and he's facing questions he simply cannot answer.

But what about the other LIV Golf players here? Well, they appear to be emboldened by the criticism that's been thrown at them.

Gooch, in particular, was asked if that criticism has galvanised the LIV Golf players?

"Yeah, for sure. Everybody, it feels like, is against us, and that's okay. Like you said, it's kind of banded us together, I think," he told the media.

Gooch, who committed a bit of an own goal when he compared the LIV Golf atmosphere to the Ryder Cup, also confirmed an earlier report that he had only signed up to play one of the Saudi-backed events.

But when the PGA Tour suspended him, he signed up with the Greg Norman-fronted league full time.

Well, he only offered three words about the situation. He was asked how his life has been since he has joined LIV.

"Great, much better," he said.

Johnson is also tuning out the noise. "I don't read anything," he said.

"So I wouldn't know what you were saying or if there was anything negative being said. I don't pay attention to it."

He added: "It doesn't bother me because obviously, everyone has their own opinion and I have mine, and the only one I care about is mine."

Next page: JT and Lowry involved in hilarious exchange at The Open