Earlier in the week, Jack Nicklaus, Gary Player and Tom Watson graced the grounds of St Andrews and Rory McIlroy's appetite for victory has built from that. 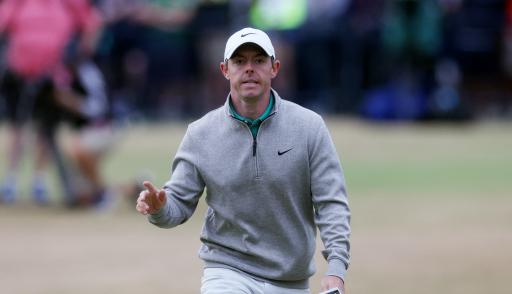 After eight years of frustration, toil and anger, Rory McIlroy might have chosen the perfect week to end his major drought at the home of golf.

Saturday was a special and memorable day in the history of The Open Championship at St Andrews. McIlroy's 66 took him into a tie for the lead with Viktor Hovland who also played magnificently in round three.

Yesterday's round from the Northern Irishman is a culmination of all that he has seen this week. From the Celebration of Champions event on Monday to Tiger bowing out on Friday.

I believe McIlroy has absorbed all of these moments and thought to himself: "I want another taste of this." Royal Liverpool was a fantastic venue to win his first Claret Jug, but there is nothing like St Andrews.

It has been an incredible week made by incredible people at The 150th Open. The presence of Jack Nicklaus, Gary Player and Tom Watson in the past champions event on Monday set the tone for the week.

Related: The Open: When do Rory McIlroy and Viktor Hovland tee off on Sunday?

McIlroy played with Tiger Woods and Lee Trevino in this fun four-hole competition. As great a player that Rory already is, he has been in the presence of people who transcend the sport.

When Woods emotionally said goodbye to the St Andrews crowd on Friday, McIlroy had just started his second round. Immediately, this reminded us of when Nicklaus bidded farewell to the tournament in 2005 as Woods entered the fray, going on to win his second Open title.

The 33-year-old stood and saw the admiration and love that the 15-time major champion received from his fans and this has spurred him on to his most promising major charge in many a year.

He was denied the opportunity of glory on the Old Course in 2015 with injury and he came tied third back in 2010, behind a stunning performance from Louis Oosthuizen.

Deep inside, McIlroy wants to join Nicklaus, Woods, Ballesteros and Faldo on the St Andrews winners board. He fully understands what it will mean to lift the Claret Jug at the home of golf.

In the third round, he played strategically and sensibly which is what is required at St Andrews. His bogey on the 17th hole was well thought out, but he also showed conviction with five birdies and an eagle.

You feel his eagle from the bunker on hole 10 could go down as one of his greatest moments were he to win later today. Ryder Cup teammate Hovland is certainly a worthy opponent who will make it an enthralling final round.

It is not only the quality of his game that has taken him to the top of the leaderboard. He has seen what it means to be great after being around the best players to ever pick up a club in the last seven days.

With four major wins and 21 victories on the PGA Tour, you could argue McIlroy is already a legend of the sport but there will be no doubt if he is pictured with the Claret Jug on the Swilcan Bridge.

Whenever Rory decides to hang up his shoes at The Open, he will receive the same love and jubilation from the fans as Woods did on Friday and this will be cemented with a win on Sunday.

Next Page: Scottie Scheffler on whether Dustin Johnson topped his tee shot on 18: "No comment"