Tiger Woods says his right leg "ran out of gas" at the Masters but it's different now ahead of the 150th Open Championship. 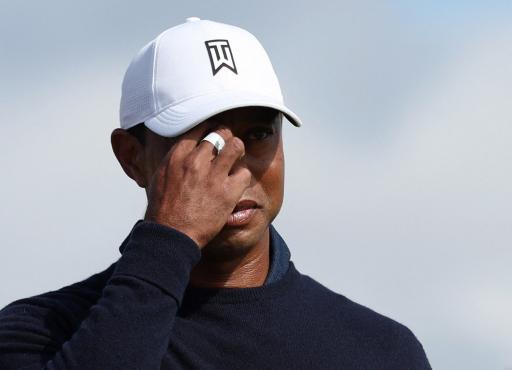 Tiger Woods admitted his surgically repaired right leg was in no way ready when he returned to major championship golf this year at the Masters but “it’s different now” ahead of The Open.

Woods, 46, spent part of his pre-Open press conference in St Andrews lambasting the LIV Golf players for “turning their backs” on what they’ve already been provided in their careers.

The big cat questioned whether some of the younger players would ever get the chance to play in some of the majors because of their associations with the rival league. “I just don’t understand it,” he said.

But Woods, a 15-time major champion and twice a winner here at his favourite golf course in the world, was also frank in his assessment of his physical conditions before he tees it up on Thursday.

Click here to see the full tee times and pairings for rounds one and two.

“Well, my body certainly can get better, but realistically, not a whole lot. It's been through a lot, and at 46 you don't quite heal as well as you do at 26,” Woods admitted.

“So, it is what it is. [I am] just lucky enough to, in our sport, to be able to play as long as we are able to play late into the 40s, especially on links golf courses like this, you can continue into your 50s.

“So, it can be done. It just takes a lot of knowledge and understanding of how to play this type of golf.

“And with the fairways being fast and firm, it allows players who are older to run the ball out there and have a chance.”

Woods said for the most part his rehabilitation from his car crash in February 2021, when he overturned his Genesis SUV, was “hoping that I could walk again”.

“You know, walk normal and have a normal life and maybe play a little hit-and-giggle golf with my son or my friends at home,” he said.

“But lo and behold, I've played championship golf this year.

“And once I realised that I could possibly play at a high level, my focus was to get back here at St Andrews to play in this championship being, as I said, it's the most historic one we've ever had.

“I just didn't want to miss this Open here at the home of golf.

“This has meant so much to me. This is where I completed the career grand slam.

“At the time I had the record in scoring in all four major championships. So, it meant a lot to me. This venue has meant a lot.”

Woods made the cut at the Masters in April after shooting a stunning 1-under par opening round, but he struggled at the weekend.

It was the same story at the U.S. PGA Championship at Southern Hills a few weeks later.

He looked in visible agony at times and withdrew after 54 holes. “My body needs more time,” he previously said.

He continued: “It's still not easy. Granted the inclines are not steep in any way.

“They're not -- the declines are not steep. But it's the unevenness that is still difficult on me.

“I have a lot of hardware in my leg. So, it is what it is. It's going to be difficult.

“Yes, the walk is certainly a lot easier than those two championships that I played in before this year. I'm able to walk a lot more holes.

“Also, then again, I've gotten a lot stronger since then. I spend more time now that I've gotten a chance to work in the weight room and get stronger and get the endurance better in my leg.

“Playing Augusta, I didn't know. My leg was not in any condition to play 72 holes. It just ran out of gas.

“But it's different now. It's gotten a lot stronger, a lot better. Hopefully it will continue to get that way.

“But again, as I said, having a lot of hardware in there makes it a little bit of a challenge.

“The biggest challenge is I'm not playing tournament golf to get tournament ready for the majors."

He continued: “I'm not hitting shots in tournaments to know what works and what doesn't work. I've had to do that at home.

“Yes, I can do that. I can do that at home to a certain extent, but it certainly is a lot better when I'm able to play tournament golf to feel tournament hardened coming into these big events.

“But that's no longer my future. I'm not going to be able to do that again. So, this is what my future is, a very limited schedule.

“I'm going to have to somehow figure out a way to practise at home efficiently and come to these events maybe just a little bit earlier and get more looks and try to get a better feel for it, and really trust what I'm doing because I hadn't proven it to myself in any other tournaments prior to this.

“Hey, just the fact that I was able to play Augusta when I just started weight bearing six weeks prior to the event, that to me was quite an accomplishment.

“Then Tulsa [at Southern Hills] was another accomplishment.

“So, this whole year has been something that I'm very proud of that I'm able to have gotten to this point with my team to get here to where I've been able to play in these tournaments when it looked like I would never have this opportunity ever again.”

Next page: Jon Rahm thinks Tiger's quote about winning is "an exaggeration"