Beaverbrook Golf Club is one of the most luxurious golf venues in England, but it was engulfed in flames which thankfully caused no casualties. 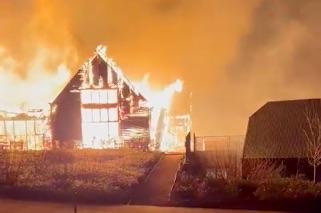 The clubhouse at Beaverbrook Golf Club in Surrey was engulfed and destroyed by a huge fire on Monday evening.

Known as one of Britain's most luxurious golf destinations, the clubhouse was completely ripped to pieces by an inferno and filmed by local residents.

Luckily, no one was hurt in the fire and although an investigation has been launched into the incident, it is thought that the cause of the fire isn't suspicious.

At 10 pm on Monday evening, firefighters were notified of the flames in Leatherhead and eight fire engines were sent to the scene where there was damage to "the entirety of the building and its basement."

The golf club, which is reported to be worth up to £90 million, is the former home of press baron Lord Beaverbrook. The clubhouse was purpose-built in 2018.

Eight-time major winning legend Tom Watson co-designed the course, which has often been voted as one of the best golf venues in the world.

"On the evening of March 7, 2022, a fire broke out in The Club House at Beaverbrook Golf Club in Surrey. The alarm was raised to the Surrey Fire and Rescue Service," said Jorge de Jesus, the group general manager at Beaverbrook.

"The Club House has been significantly damaged by the fire, however, thankfully no one was injured. Beaverbrook Hotel including The House, The Coach House Spa and The Garden House restaurant were unaffected and so remain fully operational.

"I want to express our deepest gratitude to the Surrey Fire and Rescue Service for their professional response."

Next Page: The purse at the Players Championship is absolutely FRIGHTENING...