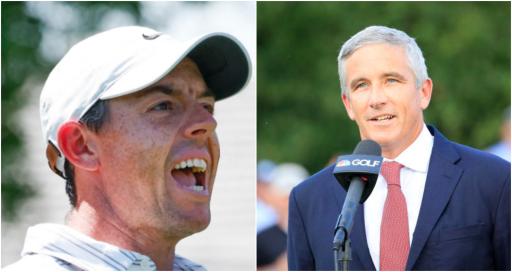 Monahan faced the media ahead of the Players Championship where he spoke on a number of issues.

Primarily, the commissioner wanted to "move on" from the talk of rival leagues and believes he has the full support of its members.

In one comment that appeared to be aimed at Phil Mickelson, he said the PGA Tour was concentrating on "legacy and not leverage".

He was asked about Mickelson and refused to confirm whether or not the oldest player to win a major is currently suspended.

Instead, Monahan said he will have a conversation with Mickelson before he could potentially return to the PGA Tour.

Mickelson massively damaged his own reputation with what many believed were repugnant comments about trying to create leverage.

Essentially, Mickelson was prepared to overlook the Saudis' human rights abuses as it was an opportunity to re-shape the PGA Tour.

Mickelson has said sorry over his true feelings around the super league and has not confirmed when and where he would return.

What did Monahan say about Mickelson?

Monahan said: "I have not talked to Phil since he made his comments and since he said that he was stepping away. Like I said, I think the ball is in his court. I would welcome a phone call from him.

"But it's hard for me to talk about the different scenarios that could play out. Listen, he's a player that's won 45 times on the PGA Tour. He's had a Hall of Fame career.

"He's won here at The Players Championship. He's inspired a lot of people and helped grow this Tour, his Tour.

In his press conference, McIlroy said: "I think the one thing the Tour could do a better job at in general is transparency."

He added: "Maybe it not being as a closed shop. I've always felt that a few of the bans or suspensions, I think that all should be announced. I think that should be more transparent, I've also said that."

With these comments in mind, what did Monahan have to say about this?

He joked: "I would just say effective immediately, Rory McIlroy is suspended.

"That's the way the system works. It's a criticism that has been lobbied against the PGA Tour through the years, and I think we always have to be open to evolving. That's something that we are open to."