Hideki Matsuyama flirted with a double digit score at the 3M Open on the PGA Tour after he found the water three times on the same hole. 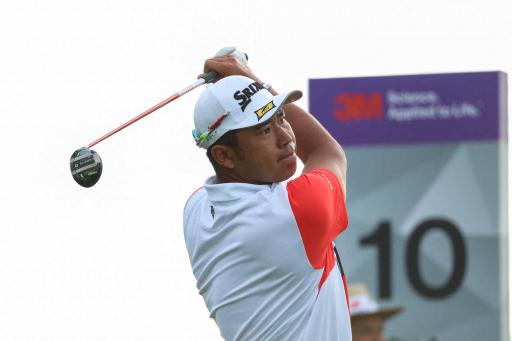 Here's a sentence we did not expect to write about Hideki Matsuyama in 2022: the Japanese golfer just dumped three golf balls into the water, on the same hole, in a PGA Tour event.

Matsuyama, the former Masters champion, is one of the strongest players in the field at TPC Twin Cities at the 3M Open.

STORY UPDATE: HIDEKI MATSUYAMA HAS BEEN FORCED OUT OF THE 3M OPEN

But he did not play like it at the par-5 18th hole. Matsuyama, 30, found the water with his tee shot and on his next two shots following drops, meaning he is more than likely to miss the cut in Minnesota.

Perhaps his mind was a bit frazzled here, as the Srixon staffer has been heavily linked with a move to the Saudi-backed LIV Golf series after the FedEx Cup Playoffs.

In the end, Matsuyama managed to salvage a quadruple bogey. He finally found dry land but he was well over the back of the green in the rough next to the grandstand when he was playing his seventh (!) shot.

His flop shot was almost a slam dunk as his golf ball clattered off the pin. Then he tapped in for a solid nine...

I mean, that is the stuff of nightmares isn't it.

It looked even crazier on shot tracker:

Hideki Matsuyama just made a  with THREE balls in the water at the 18th pic.twitter.com/593tgYiDhU

Matsuyama eventually signed for a 6-over par 77 following his flirtation with a double digit score.

Be honest, how many of you would have just walked off?

Elsewhere, the former tennis pro Mardy Fish is playing in this event on a sponsor exemption.

Fish, 40, is a gifted golfer and plays off a handicap of approximately plus two.

Yet it's fair to say he'll have a bigger appreciation for just how good these PGA Tour players are after signing for an opening round of 81.

His front nine included five bogeys and one double. Three more bogeys followed on the back nine.

At the time of writing, Champ was 6-over par after 11 holes.

Scott Piercy and Sungjae Im were tied for the lead after 18 holes on 6-under par.