Tiger Woods is hoping to play up to four golf tournaments before the 2023 Masters, according to his caddie Joe LaCava. 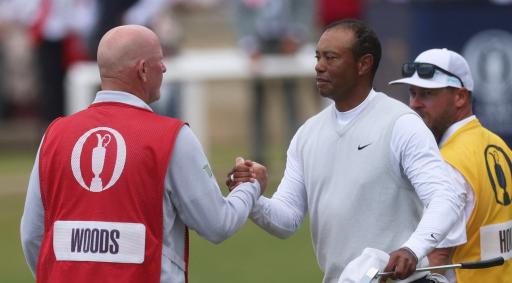 Tiger Woods' caddie Joe LaCava has revealed his boss is expecting to play three or four times before the next major championship at The Masters in April 2023.

LaCava, who was speaking on The Dan Patrick Show this afternoon, also explained how Woods has somewhat neglected his short game in recent months while largely focusing his intentions on his rehabilitation and strengthening his leg following his horror car crash in Los Angeles back in February 2021.

Woods played in three of the four majors this season, finishing 47th at The Masters, withdrawing from the US PGA Championship ahead of the final round, and missing the cut at the 150th Open Championship.

The 15-time major champion was reduced to tears as he played his final hole at St Andrews last week, knowing full well it could be his final ever Open Championship at the Home of Golf.

According to LaCava, who has caddied for Woods since 2011, he is not expected to play any more tournaments this year until his annual Hero World Challenge tournament in early December. Woods will then move on to compete in the father-son PNC Championship with his son Charlie Woods.

Charlie and Tiger performed admirably in the PNC Championship last year en route to a tie for second behind John Daly and his son John Daly II. That particular week marked Woods' return to competitive action, albeit not an official PGA Tour event.

Woods will then hopefully play his Genesis Invitational tournament on the PGA Tour in the second week of February 2023, and potentially one more before The Masters in April.

"I'm hoping that he will play maybe in December at the Hero and the father-son, and then maybe the Genesis [Invitational]... I'm hoping three, maybe four tournaments before The Masters," said LaCava.

"I won't do much, I'll do the same thing. I'll say 'Tiger, hey listen, if you're starting to feel better in October or November, maybe I'll come down for a couple of weeks [to Florida], we'll hang out, don't have to play every day, we don't have to practice every day, I'll be there and maybe give you a bit of motivation, we'll do some playing practice here and there and get ready for the Hero and get ready for the following year of '23 and get him ready in any respect that he needs."

Next Page: Is adidas Golf planning to buy a LIV Golf team for $1 billion?!