Tony Finau moved into contention heading into the weekend at the 3M Open on the PGA Tour at TPC Twin Cities. 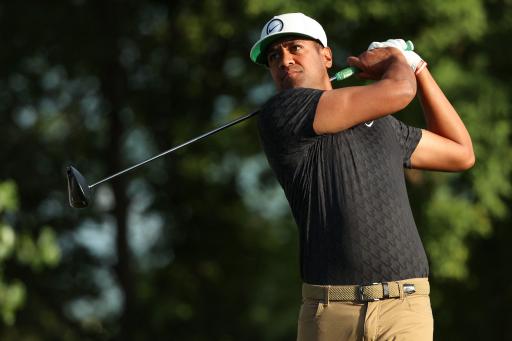 Tony Fianu says making the Presidents Cup team has motivated him to fight off fatigue as he moved into contention at the 3M Open on the PGA Tour.

Finau is one of the highest-ranked players in the field at TPC Twin Cities and he followed his solid 4-under 67 with another round in the 60s to move into the top five.

The American has good vibes in Minnesota having never missed a cut here and is searching for his third victory on the PGA Tour, but he must chase down Scott Piercy over the weekend.

Finau arrives off the back of an impressive Sunday 66 at the Old Course at St Andrews at the 150th Open Championship.

He said: "Yeah, there's always that extra motivation, but the one thing I've learned about being on those teams and being in that position before, it's almost possible to make those teams if you're looking that far ahead.

"This week I'm going to have 36 holes to play some good golf and hopefully have a chance to win and that's really where most of my focus is. The rest kind of takes care of itself."

He added: "It means everything, everything to your career. The best experiences I've had in this game have been in those team events. Whistling Straits is going to be hard to top, it was a really cool team to be a part of.

"But what it does is it keeps you hungry to want more, that's all it does. The more experiences you have like that, the more you want to be a part of those teams.

"That's definitely a motivating factor, but I would say every week you tee it up, you have a goal in mind and for me this week it's to put myself in contention to win on Sunday and I've done a good job of that for two rounds."

England's Callum Tarren, a PGA Tour rookie who performed admirably at The Country Club at Brookline in the U.S. Open, had the best round of the day with an 8-under 63.

Emiliano Grillo and Piercy are out in front going into the weekend. Sungjae Im is also in the top five.

Notable players who have missed the cut include Harry Higgs, Davis Riley, and Sahith Theegala.

Wesley Bryan has endured a torrid two days, shooting 81-78. He made three double bogeys in his final four holes in the first round and followed that with a 10 (!) on a par-4 after he hit two shots out of bounds off the tee at the second hole today.

Admittedly, the field is not particularly strong this week as players take a break after the major season concluded.

However, the big news today was that LIV Golf announced the signing of broadcaster David Feherty.