Donaldson on LIV: "Ryder Cup was greatest moment... we all did that for nothing"

Former Ryder Cup player Jamie Donaldson has offered his thoughts on the latest LIV Golf developments after Henrik Stenson was stripped off the captaincy. 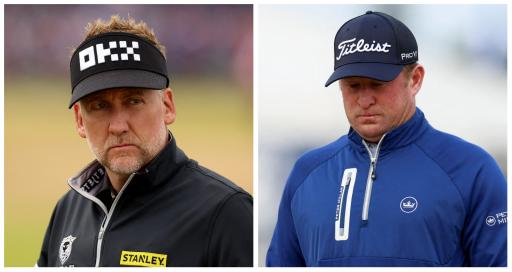 Former Ryder Cup player Jamie Donaldson concedes it would be hard to turn down an approach from LIV Golf but says it's difficult to understand the younger players joining.

Donaldson, 46, memorably secured the winning point for Europe in the 2014 Ryder Cup with an incredible shot onto the 15th green at Gleneagles.

It was a moment he will remember until the end of his days. Watching his golf ball land next to the pin from 146 yards. His finger raised in the air in triumph. The enormous roar.

Paul McGinley, the captain, immediately ran onto the fairway to congratulate his player before shaking Tom Watson's hand. Cherished memories.

In an interview with BBC Radio 5 Live, Donaldson said "I get it with the older guys" but couldn't fathom some of the younger players' decisions when they can still compete.

"But the younger guys, I find it harder to believe that they're going when they can still compete on the world stage," he said.

"I would find it hard to turn down, me personally. For an older guy that's not as competitive as he was, not competing as well in majors, I think it's difficult for people to turn down.

"The Ryder Cup for me was the greatest moment and we all did that for nothing," Donaldson told BBC Radio 5 Live Breakfast.

"We don't get paid to play in the Ryder Cup. There were bounce-offs in sponsorship possibly for some golfers. It was the greatest thing I have ever been a part of and there was no money involved.

"You can spend more time with your family and everyone else is better off because of it. How do you say no to that?

"Personally, can I still get into a Ryder Cup team? I kind of believe that I still can if I have an absolute blinder of a year.

"Is that realistic? Can it happen? Possibly. But if you feel as though it's not going to happen and then somebody is offering you cash that you have earned in your career again, just as a one-off, to go and play in Saudi, I don't see how you can say no."

Europe are currently searching for a new captain to lead them for the 2023 Ryder Cup after Henrik Stenson, who had been given the role in March, decided to play for LIV Golf for a reported £40million.

His decision cost him the job and he was sacked.

Donaldson added: "It's a very difficult decision to drop that and then go onto the LIV stuff, but it's becoming so much stronger all the time.

"The first event wasn't that strong. The second event was stronger and it's just going to keep getting stronger as in standard of players world ranking-wise.

"You don't know, if he [Stenson] goes and finishes his captaincy and by the time he has done it, he is unable to get into it [LIV], when it was something that maybe he was planning to do all along anyway - it's like an opportunity missed for him."