Sky Sports Golf's Andrew Coltart on Aaron Rai: "I suggest maybe he walks into the clubhouse when it's quiet after his round." 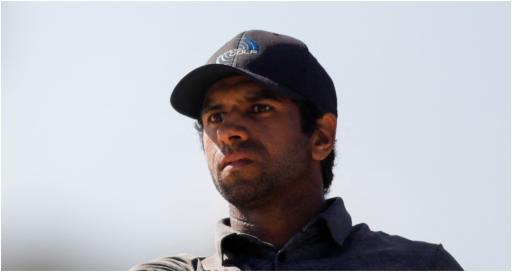 Sky Sports Golf's Andrew Coltart believes Aaron Rai might want to "walk into the clubhouse when it's quiet" after seeing him take more than 17 minutes to play the par-3 15th on day three of The Honda Classic.

Rai, who was playing alongside Rory Sabbatini on day three at PGA National, endured a horror show on the treacherously difficult 15th hole.

After sending his tee shot into the left bunker, Rai splashed his ball out across the green and onto the wall just inches from the water.

The ball was unfortunately unplayable for the former Scottish Open winner and after plenty of deliberation about what to do next, he eventually called in a rules official.

While all this was going on, Sabbatini decided to putt out his three-footer... but he missed.

Let's just say that did not go down particularly well for the Olympic Silver Medalist.

Rai then got his ruling and it was deemed he would go back to the original spot to play his fourth shot.

The only downside for Rai in this scenario, instead of going to the drop zone, was that dropping the ball into sand was always likely going to plug.

Aaron Rai hits in water over the green out of bunker. Has to drop back in the bunker to a semi-plugged lie. Plays from bunker into same bunker for a better lie.
Golf is hard.

With water behind the pin and his ball submerged, Rai failed to find the green with his next shot and left his ball in the sand.

He then splashed it out to nine feet and to his credit made the putt for a triple-bogey six.

The biggest issue about all of this was just how long it took Rai and Sabbatini to play the hole.

By the time Rai's putt for a six dropped, the group had taken 17 minutes 9 seconds to complete the 15th hole.

It also meant a bunch up for groups tucked in behind.

But it was all Rai's doing though, and Sky Sports Golf's Coltart and Rich Beem were fairly miffed by proceedings, especially with the length of time it took the World No.100 to play his fourth shot from the bunker.

"He's got to make his mind up sooner rather than later," said Beem, who won the 2002 US PGA Championship.

"You have to get on with it, you have to play without undue delay.

"I know this is a challenging shot, I know it's a moment you don't want to be in but you've got to play."

"Yeah undue delay," agreed Coltart, who won twice on the European Tour and represented Europe at the 1999 Ryder Cup.

"It's tough, I can emphasise, everything is difficult and important for him, but we need to come to a resolution and to a decision a bit quicker than this."

When Rai eventually holed for a triple-bogey six, Coltart said: "Goodness me, nearly 20 minutes to play a par-3. That is going to cause serious backlog. I suggest maybe he walks into the clubhouse when it's quiet after his round."

It's fair to say plenty of golf fans on social media did not take kindly to watching Rai take an age, either.

Sky Sports Golf's Nick Dougherty did have some compassion for Rai, though.

"I know it took him a long time to play the 15th hole, but he sticks to his routine and his process, it's so important to him and what he does," said Dougherty in the commentary box.

"Rigid in it, and it allows him to bounce back from emotional feelings like that with the collapse of a triple."

To Rai's credit, he bounced back with three consecutive birdies on 16, 17 and 18 to sign for a round of 3-over 73 but it leaves him at 2-over par for the tournament and well down the leaderboard after 54 holes.

NEXT PAGE: PAIGE SPIRANAC BLASTS PHIL MICKELSON OVER HIS APOLOGY AND LABELS HIM "TOO SOFT" FOR SOCIAL MEDIA