Paige Spiranac hits out at Phil Mickelson's apology and then labels him "too soft" for social media. 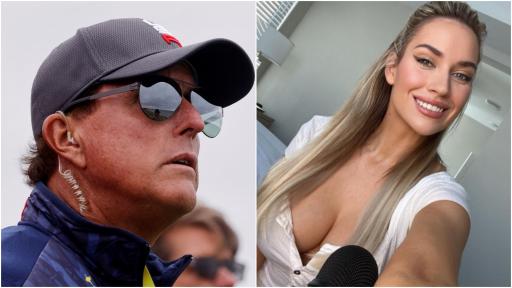 Paige Spiranac has slammed Phil Mickelson on her latest 'Playing-A-Round' podcast episode by claiming he made the "worst public apology" she has ever heard following his controversial remarks about the PGA Tour and a new Saudi-backed golf super league.

Spiranac, who has amassed more Instagram followers than any other golfer on the planet with 3.2 million, also declared Mickelson is "too soft" for social media.

RELATED: PAIGE SPIRANAC ADMITS IT'S "HARD TO WALK WITH THESE JUGS" WHEN IT COMES TO GOLF

Paige was speaking on her popular 'Playing-A-Round' podcast just days after an excerpt of Mickelson's comments were made public by golf biographer Alan Shipnuck.

In such remarks to the author, Mickelson said he had "a once in a lifetime opportunity to re-shape the PGA Tour".

Lefty then called the Saudis "scary motherf***ers" and suggested their money had finally given him and the players leverage.

His comments quickly drew derision from the golf world and fellow PGA Tour players, with Rory McIlroy describing him as "naive and ignorant".

Mickelson has since apologised on social media but has lost his sponsorship deals with KPMG, Workday and Heineken / Amstel.

Callaway has also decided to "pause" its relationship with Mickelson having sponsored him since 2004.

Spiranac is not surprised in the slightest, especially given Mickelson issued what she considers to be the "worst public apology" of all time.

"Phil came out and had this, probably the worst public apology that I have ever read, it was so bad," said Spiranac on her latest podcast episode.

"I don't understand how this happens because you see a lot of people who have been cancelled and they get a lot of flack for their apology.

"They have huge PR companies, they have their teams, they have people around them, so how are these apologies getting approved to be able to put out to the public?

"So Phil, it was long, it was a long apology. He basically started out saying he was the victim, then moved into how he was doing this because he thought he was helping golf and helping younger players get more money, then it moved into mental health and taking a step back.

"It was just all around just bad. He never really took responsibility I think because he stands by what he says and what he's doing.

"So I think my biggest issue with it and with anyone who is cancelled in doing something, if you stand by it, stand by it. Say 'hey, I like what I'm doing, I'm sorry that you took it this way but I think this is right and that''s that', or don't come out with an apology.

"But you could tell it was a half ass apology, he didn't care and he just, it's bad. It was just horrible."

Paige also believes Mickelson is "too soft for social media".

"It almost seems that he is under so much pressure that he is having a nervous breakdown," added Spiranac.

"Even at the end of his statement he said 'I need to take a minute away from this because the pressure of being in the public eye and everything that is going on is too much for me.'

RELATED: PAIGE SPIRANAC ON BEING MORTAL ENEMIES WITH PHIL MICKELSON

"I almost think with the advancements of social media within his career, it's been a detriment to him, even though it was so great at the beginning and everyone loved him, he seemed a little too soft for social media."

What do you make of Mickelson's apology? Share your thoughts and comments on the GolfMagic social media channels.

NEXT PAGE: CALLAWAY DECIDE TO "PAUSE" THEIR LONG-TERM SPONSORSHIP OF PHIL MICKELSON