Who knew Phil Mickelson marked his Callaway golf balls like THIS?!

Phil Mickelson does not use a number on his golf ball on the PGA Tour. Instead, he uses his logo. 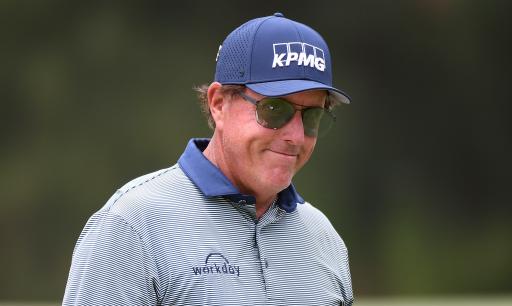 A close-up image of Phil Mickelson's Callaway Chrome Soft X golf ball has emerged on social media this week and it's interesting to note that he does not have a number on his dimples, but instead his own logo.

I guess when you're Phil Mickelson and one of the most successful golfers in history, you can kind of do whatever you want.

Had no idea Phil Mickelson used his logo on his golf ball instead of a number, but I LOVE it. pic.twitter.com/t7lG11fvwx

GOLF's game improvement editor Luke Kerr Dineen brought it to everyone's attention on Twitter yesterday, and Mickelson hit back with a response.

One golf fan below makes an interesting point as to what Mickelson does when he is hitting a provisional if he is always using a golf ball with his logo?!

We would have to let Phil answer that one.

"I'm playing a Titleist 2 with a blue line"

"I'm playing a Callaway with me on it"

How does he distinguish between the first ball and the provisional?

What number golf ball do you play? Share your thoughts and comments over on our social media channels.