It may not have been the first round that Justin Thomas wanted at the Olympic Games, but you have to admire his consistency. 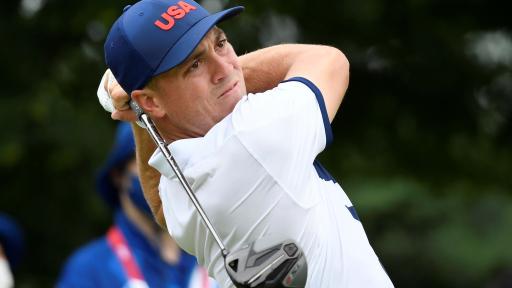 Justin Thomas shot an incredibly rare score on the first day of the men's golf event at the Olympic Games, as he made par on every hole.

Before his round, Thomas had described the chance to represent America at the Olympics as "the coolest thing" he has ever been a part of.

Although the former PGA champion shot a very consistent score of level-par, making 18 pars in the process, he is eight shots behind Sepp Straka's first-round lead of 8-under-par.

It would appear that the 14-time PGA Tour champion is loving his time in Japan. Before he began his campaign at Kasumigaseki Country Club in Saitama, Thomas posted a funny tweet about his visit to the gym in the athlete's village.

Went into the Olympic village for a nice workout last night. Safe to say there weren’t many athletes fighting me for the 20 lb dumbbells

The 28-year-old may not be a weightlifter or a track athlete, but he is part of a very versatile and varied set of athletes competing in Japan this week, which is what makes the Olympics so special.

Austria's Straka surged into an early lead at the Tokyo Olympics with a first-round score of 63, as Ireland's Rory McIlroy made a solid start on 2-under-par.

McIlroy joins 2021 Open champion Collin Morikawa on 2-under-par after day one, but it is Xander Schauffele leading the American charge on 3-under-par.

Paul Casey is currently fronting the challenge for Team GB as the experienced Englishman carded a solid score of 4-under-par to sit just four shots behind Straka.