"Are you f---ing kidding me!?" Tyrrell Hatton RAGES at The Players

Tyrrell Hatton lost his cool once again on the golf course. This time at The Players Championship at TPC Sawgrass. 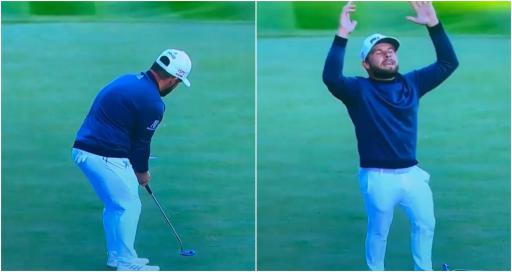 No wonder this one never made its way to the highlight reel. But Tyrrell Hatton is at it again.

This time our scene was The Players Championship at TPC Sawgrass during the third round at the Stadium Course.

Ryder Cup star Hatton had some very choice language after his birdie putt failed to drop. Where were you, gravity?

Just how the ball stayed up we'll never know. Hatton will never know. And it appears he will absolutely never mellow on the golf course.

"Are you f---ing kidding me?!" yelled an astonished Hatton, 30, as he decided to theatrically drop his putter on the dance floor before putting his head in his hands.

Hatton was wearing a hat that features the letters PLD. Find out why here.

How I feel every time I go on the golf course too @TyrrellHatton #THEPLAYERS pic.twitter.com/OGJLyFxT3f

He snapped his driver at Yas Links at the 18th hole during the final round of the Abu Dhabi HSBC Championship on the DP World Tour.

Hatton later told of his feelings of that hole.

He said: "It must be one of the worst par 5s that I've ever seen in my life and, over the last two days, I've clearly played it about as well as it was designed.

"What's wrong with it? Where do you start? It shouldn’t have a bunker in the middle of the fairway, and it shouldn't be over 600 yards from a forward tee.

"If you hit a good drive as a pro you should have at least a chance to go for the green in two, otherwise the hole becomes a par 3 and that’s if you play it well."