'Being me is ENOUGH': Rory McIlroy reflects after landmark PGA Tour victory

Fresh off his 20th PGA Tour victory in Las Vegas at the CJ Cup, the Northern Irishman admitted he was "trying to be somebody else". 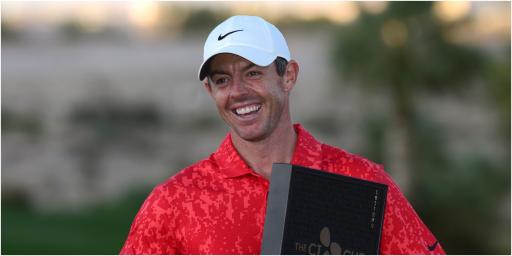 When Rory McIlroy speaks to the golf world everybody listens.

He's no doubt one of the best interviews in the game as he often takes pause to consider his answers.

Rarely, if ever, does he go off on a tangent or ramble on about thanking his sponsors for contributing to his success.

Bryson DeChambeau has previously been lambasted before for thanking them in the immediate aftermath of victory.

On the European Tour this weekend Matthew Fitzpatrick claimed the Andalucia Masters title.

Before speaking to the media he managed to pop on that shiny watch and scratch his ear so the cameras could pick it up.

We're not having a pop at you Fitzy, that is just the way of the world and no doubt we'd all do the same.

Which is why the whole of the golf world was eager to hear what the Northern Irishman had to say after he tasted victory once again.

A one-stroke victory over home favourite Collin Morikawa at the CJ Cup at Summit means McIlroy has now won 20 times on the PGA Tour.

"There was a lot of reflection the last couple of weeks," McIlroy, 32, told the PGA Tour official broadcast beside the 18th green.

"I think for the last few months I was maybe trying to be someone else to get better.

"And I sort have realised that being me is enough and being me, you know, I can do things like this."

McIlroy had previously suggested he thinks the days where one player will dominate the PGA Tour season appear to be over.

He picked out Keith Mitchell as an example and praised him by saying he thought he was "a hell of a player".

But this weekend in the Las Vegas desert dominated once again as Rickie Fowler displayed a return to glistening form.

Morikawa carded his lowest round ever recorded on the PGA Tour with a 10-under 62 and McIlroy still answered and found a way to win.

We wouldn't be so sure.

MORE: THE BEST PETER MILLAR JACKETS FOR THE AUTUMN

NEXT PAGE: PHYSIO BREAKS DOWN CHANCES OF TIGER'S RETURN

PGA tour
Rory McIlroy
Tiger Woods
bryson dechambeau
cj cup
Previous
Rory McIlroy: What's in the bag of the 20-time PGA Tour champion?
Next
PGA Tour: How much did each player win at the CJ Cup?