Bryson DeChambeau on Tiger Woods: He was never able to live normal life

Bryson DeChambeau has revealed what it's like knowing Tiger Woods as he heads into 2022 with fresh perspective and a goal of ultimately becoming the world number one. 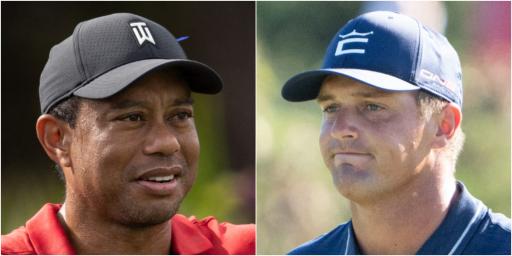 Bryson DeChambeau has spoken of his friendship with Tiger Woods and how he was never able to live a "normal life".

The 28-year-old was speaking before he heads to the Farmers Insurance Open at Torrey Pines on the PGA Tour for his second event of 2022.

He is looking to improve upon his performance at the Tournament of Champions where he finished 25th.

A new driver and a new sense of perspective appear to be part of his motivation for this year, where he hopes to again make waves.

Ultimately, the goal is to be the world's number one golfer, win majors and be the best he can possibly be.

DeChambeau recently joined the Rick Shiels Golf Show where he spoke for more than 90 minutes on a range of topics.

He told how he is not trying to disrespect the game with his pursuit of distance and some regrets over his behaviour last year.

And yes, he also discussed the topic of shouting fore.

DeChambeau was asked about 46-year-old Woods in the podcast.

Woods and DeChambeau were seen laughing, joking and throwing around a football in Albany, Bahamas for the Hero World Challenge last December.

It was where Woods tentatively confirmed plans for at least trying to play golf again at some point in the future.

Asked in a quickfire Q&A segment DeChambeau was asked, "Tiger or Jack?".

"Boy that's a tough one. For me though it's gotta be Tiger just knowing him pretty personally. It's great.

"He's a great guy. To be honest with you and everyone can talk about what's gone on, but he's done things in his life for certain reasons and everything he's done for the most part I understand from a protection perspective.

"It's great. It's very nice. I respect it. It's not like we're best friends or anything but I can call him up if I've got a question and he's always there for me. It's been awesome."