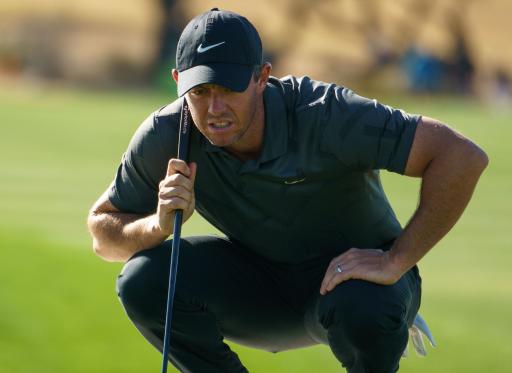 Rory McIlroy was spotted with a different putter in his hands on day one of the WGC-Workday Championship at The Concession, but then admitted to feeling "frustrated" on the greens.

McIlroy, who opened with a respectable 3-under 69, has switched from a TaylorMade Spider X putter to a TaylorMade TP Juno.

But judging by his reaction to several short missed putts on day one at The Concession, it remains to be seen whether McIlroy sticks or twists again for the remainder of the week, and upcoming events in the Florida Swing.

It wasn't so much the putter's fault though. McIlroy was just questioning his own choice of reads.

RELATED: RORY "FRUSTRATED" WITH MISSED PUTTS ON DAY ONE

"I missed three putts on the last nine holes that I thought for sure were going to go right to left, and then I missed one on another hole that I gave a little less break as a reaction to those and that one dove and broke left," McIlroy told Sky Sports.

"I felt like I got a good feeling with what I'm doing with the long game so I'll hit a few balls to try to groove that in and I'll go to the putting green to try to figure it out a bit.

"Of course it's frustrating because you come off the course thinking you could be three or four shots lower than you were, but I've just got to keep putting the work in and hopefully it finds its way in there.

"I holed some good putts out there, it's not that I didn't hole anything, it's just that I missed a few."

Elsewhere in the equipment world, Dustin Johnson was spotted testing TaylorMade's new SIM2 driver. At the moment, he has been happy to stick with the original SIM driver as he continues ongoing testing with the big stick.

Johnson has been on the range this week testing out the SIM2 driver alongside TaylorMade’s Keith Sbarboro in multiple shafts, including the Fujikura Ventus Black 6 X, Fujikura Speeder Evolution 661 and an LAGP Proto.

It was an opening day to forget for the World No.1 at The Concession, however, with a dismal round of 77.

Previous
WATCH: What's in Brooks Koepka's bag on the PGA Tour in 2021
Next
Golf fans react to Bryson DeChambeau's NIGHTMARE opening round in WGC event